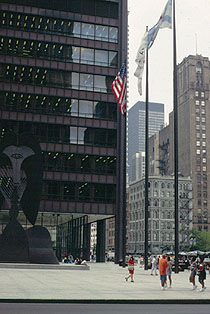 This is a picture of the Richard J. Daley Center in Chicago. That's the Picasso whatchamacallit in the Plaza on the left.

This is one of seven primary courthouses in Cook County. The First Municipal District sits here, including Traffic Court. This is where you'd go if you get a speeding ticket in Chicago.

Also in this building are the Law, Chancery, Domestic Relations and Probate Divisions. Most of my business is done here. Although this is a Miesian box, it was designed by Miesian disciples, not by the master. I've always thought this building to be 'warmer' or 'friendlier' than the Federal Courthouse in the Dirksen Federal Building down the street (which actually was designed by Mies van der Rohe). 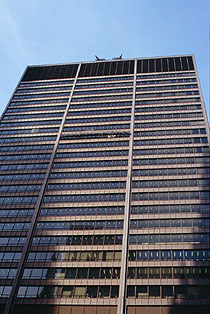 There are a lot more courtrooms in the Daley Center now than when the Blues Brothers drove through the lobby in the late 70's. A lot of the county officials who formerly had offices in this building were relocated across the street to 69 W. Washington so that new courtrooms could be carved out. And the Appellate Court moved to 160 N. LaSalle. One of the reasons I was 10 minutes late to court yesterday -- besides the train -- was that I went initially to the wrong courtroom. I went to the 24th floor, instead of the 25th.

The Criminal Courthouse is at 26th and California; I try and stay away from there. There are also five Municipal District Courthouses in Skokie, Rolling Meadows (just across from the Arlington Race Track -- and I'm told that was not a coincedence), Maywood, Bridgeview, and Markham. I've had cases in all of the municipal districts. And there's a lot of other places where courts convene in Cook County.

But this is not the way things work in all Illinois counties. I had a case once in Dixon (ironically the attorney on the other side was also from Chicago). The folks out there practically sent flares up on the road so we could find the place. When I arrived, I asked someone where our case would be heard. "Where would you like?" came the reply. "We have two courtrooms." (And this person was not being sarcastic.)

The bigger the county, the bigger the courthouse. DuPage County has pretty close to 1,000,000 residents. The current DuPage County Courthouse, on the outskirts of Wheaton, looks like a trendy mall, inside and out. But it was the subject of protracted litigation shortly after it opened -- seems the designers failed to put in adequate ventilation. And people started coming down with "sick building syndrome": The fumes given off by the new carpets and furnishings were recirculating in the building. The Sheriff's police -- who worked the security entrance -- went on a deliberate work slow-down to call attention to the problem -- creating massive delays every single morning.

Of course, the furniture was probably not the only ventilation problem. The building was a "no smoking" building right from the start -- but folks figured that meant out in the hallways and in the courtrooms and didn't think it meant in their private offices. I was at a pre-trial conference shortly before the building closed for repairs (for a year or so we had court in the nearby county fairgrounds) and when we repaired to the judge's chambers, he immediately lit a smoke. The mound in the ashtray suggested that this was not his first that day. 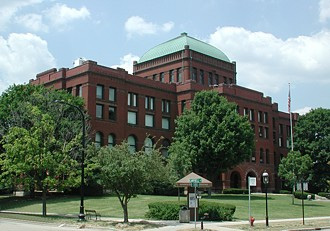 This is the old Kane County Courthouse. There's a new building west of Geneva where the criminal cases are heard. I don't know what else is heard there. This is the only Kane County Courthouse I've been in and I know that at least some civil cases are still heard here. This is a true 19th Century courthouse, and the Civil War monument out front was erected by the Grand Army of the Republic, the Union Army veteran's organization. 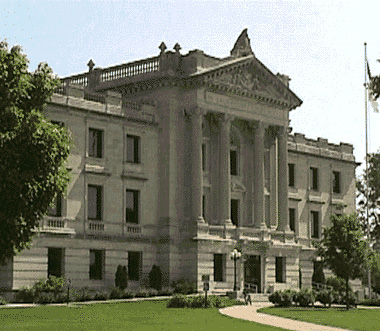 Moving west from Geneva, the DeKalb County Courthouse is a true beauty. I've often thought that the restored courtroom on the top floor could be a movie set -- and, in searching for pictures this morning, I found out that it apparently was used in one movie. If you're ever in Sycamore, stop by and take a look. 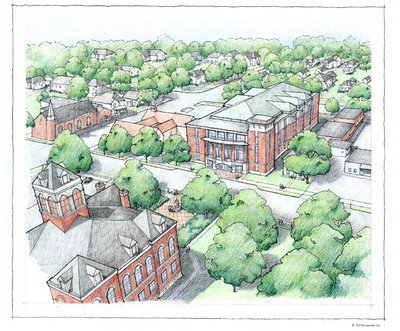 I mentioned recently that I'd been in Ogle County for court. They'd built that new building on the upper right since I'd been there last. 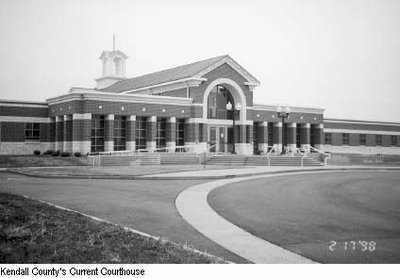 This may be my favorite new courthouse, in Yorkville, Kendall County. Yes, it runs smack dab up against a cornfield (no one ever builds a new courthouse in the old courthouse square anymore), but those cornfields will be subdivisions soon enough.

What I like about this building is that it captures the spirit of the old fashioned courthouses, and even some of the look and charm -- but with all the modern bells and whistles, including the hidden door in the courtroom where people in orange jumpsuits and leg irons can be more easily brought in and out.

Hope you enjoyed the nickel tour.
Posted by The Curmudgeon at 10:56 AM

Worth all five cents!

hey curmy! no time to read, just popping in to say ciao y°all.... it is a rainy day in tuscany but we are having fun anyway. this is hard work. tomorrow the ship and rest i hope......take care, bee and the sarge

*laughing* I can well believe the story about Dixon, I flew through the new courts building in a wedding veil, on the way to pay the court clerk the ten dollar fee on my wedding day; and had six people try to escort me to the judge's chambers...and we were getting married across the street in the OLD courthouse!
I DID enjoy the nickel tour, I love courthouse architecture, at least the older ones that don't look like boxes. In Texas, they're mostly older and have character like the DeKalb courthouse...hey maybe that's a post for my own blog!