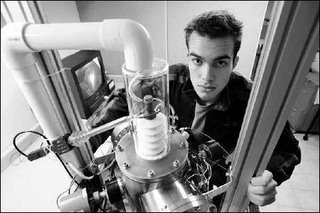 This started out as another Thanks-
giving story.

At left is a picture of Thiago Olson, a 17 year-old kid -- who built a fusion reactor in his parents' Oakland Township, Michigan home.

Here is the link to Gina Damron's story about this achievement, published in the November 19, 2006 edition of the Detroit Free Press. Here's just a brief excerpt:

He's on the cross country and track teams at Stoney Creek High School in Rochester Hills. He's a good-looking, clean-cut 17-year-old with a 3.75 grade point average, and he has his eyes fixed on the next big step: college.

But to his friends, Thiago is known as "the mad scientist."

In the basement of his parents' Oakland Township home, tucked away in an area most aren't privy to see, Thiago is exhausting his love of physics on a project that has taken him more than two years and 1,000 hours to research and build -- a large, intricate machine that, on a small scale, creates nuclear fusion.

Nuclear fusion -- when atoms are combined to create energy -- is "kind of like the holy grail of physics," he said.

In fact, on www.fusor.net, the Stoney Creek senior is ranked as the 18th amateur in the world to create nuclear fusion.

I'd seen this story on line last Wednesday, the day Oldest Son and his many buddies descended on my house for a Thanksgiving Eve turkey dinner.

So, while they were eating -- keeping a safe distance, lest I get bitten too -- I mentioned the story and gave them a bit of a hard time about it. These young men are all seniors at the University of Notre Dame, and each one brighter than the next. So, naturally, I called them a bunch of slackers -- comparing their accomplishments to this high school kid, Thiago Olson: He goes down into his parents' basement and experiments with a nuclear fusion reactor he built himelf; you guys go into my basement and play Guitar Hero II.

Well, I thought it was funny.

But, cautious sort that I am, before including that anecdote in my Thanksgiving story, I wanted to look up the article again on line and provide the link.

And I didn't find it right away.

Instead, I found this November 23, 2006 AP story by Angela Charlton. Here are the opening paragraphs:

PARIS - Physicists have dreamt about it for decades: harnessing the fusion process that powers the sun to make clean, safe and limitless energy. A multinational pact signed Tuesday may bring that dream a step closer to reality. 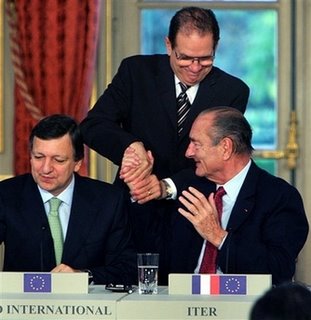 Seven partners representing half the world's population have agreed to build an experimental fusion reactor in southern France that could revolutionize global energy use for future generations.

Yet it is also just an experiment - a bold, long-awaited, $12.8 billion experiment - and it will be decades before scientists are even sure that it works.

Except for two problems. First, more from the story:

Physicists have been trying for half a century to create fusion, which replicates the sun's power source and produces no greenhouse gas emissions and relatively little radioactive waste.

The International Thermonuclear Experimental Reactor project recognizes that no single country can afford the immense investment needed to move the science forward.

Trying? For 50 years? What do you mean it will be "decades" before we know if this works? Thiago Olson got a fusion reactor going in his parents' house... and he's the 18th "amateur" to do so. Nor did he bankrupt the resources of any nation while working on his hobby, although Ms. Damron's story did say, "To get all of the necessary parts, Thiago scoured the Internet, buying items on eBay and using his age to persuade manufacturers to give him discounts. The design of the model came from his own ideas and some suggestions from other science-lovers he met online." Maybe ITER could try eBay as well? 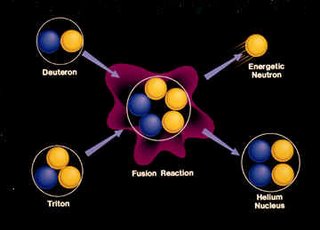 The other problem with the ITER project is its glacial pace. Last week's story looks an awful lot like the same story reported in June 2005. Here is the June 2005 story from the BBC and from the Boston Globe. You decide.

And this French fusion reactor idea has been kicking about since at least November 2003 as this BBC story shows.

People: Thiago Olson was probably still working with Lego in 2003. Since then he's built a fusion reactor in his parents' garage. Granted, a practical commercial fusion reactor is surely more complicated, and expensive, than young Mr. Olson's basement model. But why is this happening so s...l...o...w...l...y?

Forget about the dramatic plunge in energy costs that science fiction writers have promised ever since commercial fusion was first imagined: Think of what this would do to the propspects for peace in the world. Oil would become... irrelevant.

I wish I were more technically inclined, so I could lend a hand. Instead, all I can do is ask our government: Can you give Thiago Olson a call? Olson told the Detroit Free Press that he hopes someday to work for the government, like his grandfather, who designed tanks for the Department of Defense, once did. Maybe someday should be today.

What do you think?
Posted by The Curmudgeon at 9:47 AM

I thought your readers would be interested in looking at these energy technologies:

Vincent Page (a technology officer at GE!!) gave a presentation at the 05 6th symposium on current trends in international fusion research , which high lights the need to fully fund three different approaches to P-B11 fusion

He quotes costs and time to development of P-B11 Fusion as tens of million $, and years verses the many decades and ten Billion plus $ projected for ITER and other "Big" science efforts.

And:
Should Google go nuclear

If anyone could make the Fusor work it probably would be Google.


Also:
The Navy Heats up "Cold Fusion" with Use of CR-39 Detectors in LENR Experiment:

The field of low energy nuclear reactions, historically known as cold fusion, has never had simple physical evidence of the claimed nuclear processes to physically place in the hands of doubters.

Scientists at the U.S. Navy’s San Diego SPAWAR Systems Center have produced something unique in the 17-year history of the scientific drama historically known as cold fusion: simple, portable, highly repeatable, unambiguous, and permanent physical evidence of nuclear events using detectors that have a long track record of reliability and acceptance among nuclear physicists.

Using a unique experimental method called co-deposition, combined with the application of external electric and magnetic fields, and recording the results with standard nuclear-industry detectors, researchers have produced what may be the most convincing evidence yet in the pursuit of proof of low energy nuclear reactions.

Olson for President! Maybe when he’s done solving the energy crisis, he can fix our health care system.

Getting fusion reactions to occur, as these amateurs have done, is quite simple. Just accelerate light nuclei to sufficiently high energy and have them hit material containing other light nuclei. Almost all the ions will slow down without fusing, but about 1 in a million will undergo a fusion reaction.

This is 1930s level techmology. The Nobel Prize for the first people to do this was awarded in 1932 to Cockcroft and Walton (protons on lithium).

What this can't do is lead to a workable fusion reactor, since the accelerator inevitably uses much more energy than is produced by the fusion reactions. The chance of fusion is just too low and the rate of loss of energy to ionization and scattering in the cold target is too high.

So, the comparison of the amateurs to the ITER project is completely unfair, since the amateur approach does not and cannot ever do what ITER is trying to do -- be a useful energy source. ITER can certainly be critized on other grounds, granted.

BTW: cold fusion, IEC, and other such fringe approaches are being ignored by the fusion community for darned good reasons. Cold fusion is comparable to ESP or UFO studies in its level of scientific reality, and IEC has its own probably insurmountable roadblocks to achieving net energy gain (as do other schemes involving plasmas not in thermal equilibrium).