I have actually heard of Tom Cruise; I saw Risque Business, mostly because it was filmed in Chicago.

(I want to point out that I have ridden the CTA many, many times and nothing like that ever happened to me.)

Anyway, Mr. Cruise has apparently made a number of other movies as well. I seem to recall watching Eyes Wide Shut on cable -- strictly because it was Kubrick's last film, you understand.

And I was aware that Mr. Cruise had divorced Nicole Kidman, whom I do recall from the aforementioned Eyes Wide Shut. Yes. (*Significant pause follows.*)

Sorry. I became distracted for a moment.

Anyway, I know Mr. Cruise has made a number of other pictures because I read all the reviews (get well soon, Roger Ebert) but I've never had any interest in seeing any of them.

As for this Katie Holmes person, I have no idea who she is, although, in this wedding photograph, she certainly seems attractive. 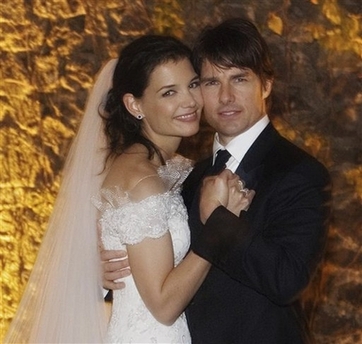 According to the news, this wedding was performed in Italy, in some old castle, and was quite a big deal. To each their own, I suppose.

Although the young couple does seem to have put the cart before the horse, haven't they?

I also read that this wedding, however tardy, was a very exclusive event. Not even our own Oprah could get an invite, and yet, according to an article I seem to recall reading on the subject, Oprah was in some way associated with Mr. Cruise's tender declaration of affections toward his new bride.

I was also not invited to the nuptial celebration, but I had other things to do this weekend anyway.

Many of you looking in on this, however, are familiar with Empress Bee and her husband and blogging companion Sarge Charlie. They're off on a cruise... to Italy... and their blogs are on hiatus pending their return.

Coincidence? Does anyone know if they packed candlesticks?
Posted by The Curmudgeon at 8:00 AM

I wasn't invited either...

Do you think that's what Bee & Charlie are doing?? You know, come to think of it, I haven't gotten a email from her in a few days!

Tom really "jumped the couch" if he snubbed Oprah. At least he made Katie an honest woman by marrying his baby's mama:-)

I hope Bee had fun at the wedding.

See, this is how we get one of those Internet rumors going....

Barb wonders... and MJ just goes with it and the next thing you know Bee and Charlie are getting emails from TMZ.com asking for candid wedding snaps and wondering what the heck is going on....

If that's what Bee and Charlie are doing, I hope they had fun...but somehow I highly doubt it.