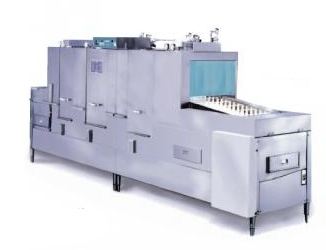 This is a commercial dishwasher similar in appearance and function to the one in our dorm kitchen during my undergraduate days. Dishes would go in dirty at one end, and emerge from the other, clean and hot. Very hot.

Although I worked in the kitchen frequently during my undergraduate years, I never got near the dishwasher. My job was to take the dishes off the conveyor belt as they came from the dining hall into the kitchen and bang the excess food and garbage off them.

This was the mid-70's and people still smoked indoors. Particularly after meals. There were ashtrays on all the tables, but my fellow students often used a dish for this purpose, particularly on Steak and Shrimp Night.

The undergraduates looked forward to Steak and Shrimp Night as a rule: The meat was identifiably some sort of beef and the shrimp was heavily breaded and deeply fried. And there was sauce for the dipping. Salad bowls were filled with sauce at the outset of the meal... and discarded cigarettes and sauce at the end.

Those were the worst, as I recall, because so many of the kids put their butts out in the sauce. But there were several frustrated chemists among the undergrads at every meal, or chemistry majors who couldn't get enough of mixing and pouring and experimenting... and my job was to bang this garbage off the plates before sending the tray down the line.

I was never considered for 'pitching' or 'catching' dishes into or from the dishwasher because those were jobs reserved for the regular help. The kitchen staff was almost exclusively African-American. There may have been an Eastern European or a Greek among the servers, but never in the dishwashing area. And these weren't college kids: One weekend night, when supervision was light, a couple of kids pulled knives on each other to decide the question of who would 'pitch' and who would 'catch.' ('Catching' was the less favored task because -- remember? -- the dishes came out hot.)

I tried not to work weekends.

During the week the dishwashing room was under the supervision of a very large man with a deep growl for a voice. Walter was not a manager; he was merely in charge. The younger, smaller employees gave Walter his choice of tasks. And he chose to be at the far end of the conveyor line, as far from my station as possible. By the time dishes reached him, they were no longer disgusting. Whether he rinsed dishes or trays before giving them to the 'pitcher' I do not recall; I didn't pay attention to what Walter did. I did find it prudent, however, to pay attention to Walter.

As a college kid, I had a longer leash than the 'regular' employees. I could, for example, leave the room if necessary. If Ms. Jefferson (not her real name), the heavyset woman who oversaw the kitchen operations, saw me leaving, I would simply say that I'd be right back. Cryptic, uninformative, and true. And Ms. Jefferson would smile and say hurry back. I assume the food service was contractually required to employ a number of college kids -- and getting any to work there was a problem. Thus, my longer leash.

Walter sometimes found it necessary for me to leave the room to buy him a half pint of blackberry brandy (I searched long and hard for a picture of a half-pint, but this will have to do). That I was not yet of age to buy liquor was of no moment to Walter or myself. When called upon, I would dutifully run across the street to the bar (which had a package store attached) and procure what Walter wanted. I have no recollection of paying for it myself; in undergrad, that was extremely unlikely. So I am reasonably certain that Walter advanced the necessary funds.

Nor was my age an impediment at the checkout counter. This was the mid-70's. Also, I may have been known to the management. I stress may have been; I admit nothing.

But all good things must come to an end: In my senior year I procured a job 'clerking' for a lawyer downtown. Since I had just been accepted in law school this was a hardly a substantive position; 'gopher' may have been a more accurate title -- but human nature being what it is, I seized on the grander description.

I broke the news one night to Walter. I told him I'd found another job. "Who with?" he asked. Walter wasted few words.

I answered the question. Walter had another: "He's not a judge, is he?"

No, I assured him, my new boss was not a judge.

"That's good," said Walter, "because otherwise I'd have to kill you."

Walter delivered this slowly, deliberately and without the barest hint of a smile. The word "kill" acquired, if not an extra syllable, at least a few extra letters. And I believed him.
Posted by The Curmudgeon at 8:46 AM

How things were then!

Hmm.. our college kitchen/dining room (the first time I went to college a hundred years ago - not the most recent successful venture) was called "Walt's".. I'm sure it's not the same Walter.. surely not.. :)

If Walter became cranky, did you throw him a piece of raw meat along with that bottle of brandy? You make me long for the good old days.

My first job(s) were in restaurants as well, though I didn't have to suffer through washing the dishes.

I did work in a mexican restaurant as a busser though, and those dishwashers were cranky! Luckily the cooks liked me. I remember one time a dishwasher barked at me over something and one of the cooks just layed into him for it. I guess girls get special treatment...

I think I would have believed good old Walt myself.

David Gest is on I'm a Celebrity at the moment, stuck in the jungle, but refuses to wash the dishes. My husband always says the best thing about getting married was having dishwasher as a weding present, so someone invented a life saver here.