A true story -- which you probably won't believe

The story becomes increasingly implausible with every passing day and I can’t prove the truth of it – but this did happen.

It was early 1996 and I was running for judge. Again. This time I was running county-wide. I’d spent all my money two years before, and used up considerable good will with friends and family and colleagues alike, but I wanted to make another go of it. This was the campaign during which my Long Suffering Spouse bought our current home. She told me I was moving one night when I came home from some function. Or maybe I could have stayed at the old house. By myself. My wife tried to console me: “Look at it this way,” she said, “now you’ll have two lawns to put your signs on.” (We did wind up with both houses for 14 months. Because I’m stubborn. And stupid. But that’s a different story.)

When you run for judge you try and go somewhere every night. Even when you’re running without a dime and without a chance. You go out because of the Lotto theory: You can’t win if you don’t play. You go out because – you tell yourself in your occasional rational moments – even though you can’t win, you may be seen as a serious candidate, worthy of support in the next election, or the one after that, or you might forge connections that could get you appointed to a vacancy or selected as an Associate Judge.

One night I went to a reception hosted by the IVI-IPO. That’s the Independent Voters of Illinois – Independent Precinct Organization for those who like to know what the acronyms mean.

The name suggests a certain independence from the Cook County regular Democratic Party. And many of the people who follow such things really believe that the IVI-IPO is truly independent. It endorses candidates for every local office – judges included – in the party primaries. Our primary elections – in March – are when offices are really filled. Survive a Democratic judicial primary and make plans to sublet your office in December, when you’d be sworn in.

Even in 1996 I knew that I had no chance of receiving an endorsement from the IVI-IPO. I had no chance of being endorsed by any actual political organization, independent or regular. If that sounds self-pitying, consider that far too many of those who could count on political endorsements are currently under investigation, indictment, or already in jail. Sometimes being friendless and alone is a distinct advantage. And, besides, the IVI-IPO would endorse a liberal or independent in one or even several high profile races – contests in which the regulars had no chance of winning the independents’ votes anyway – but, somehow, further down the ballot, the IVI-IPO endorsements always seemed to go to the regular, slated candidates. I don't know if it's changed; that's just the way it was in 1996.

But still I went on. Did I mention I was stubborn? I was also rated qualified or well qualified or recommended by the various bar associations that reviewed my qualifications for judicial service. It was a thin reed on which to cling, but cling I did. You can’t win if you don’t play.

I don’t remember where the IVI-IPO candidates’ night was held – downtown somewhere – in a large space. For some reason I remember a place below the street, by the river – but I’ve gone to a lot of these events and they do all run together in some respects.

It’s always nice to go with someone to these kinds of things, preferably with someone who is active in the group, who can walk you around the room and introduce you and say nice things about you so you don’t have to brag on yourself. My mother always said, “Self praise stinks.”

So naturally, I went alone. Wherever the room was, it was packed: There were hundreds of candidates there alone, most of us running for judge.

One circles around the room at these kinds of things, clutching one’s club soda gamely, nodding to whoever makes eye contact, sometimes stopping to exchange words with a fellow candidate. We were all in this together, you know, and we saw each other every time we went out. Some of them I liked instantly, some I did not. And there was no real discrimination by the slated candidates toward us unslated: They knew they would win; they knew we would lose. But strange things happen and we someday still might be colleagues. And some were just friendly. That’s probably a useful quality in a candidate, don’t you agree?

And about the club soda: Alcohol was available at these functions. But I rigorously adhered to the advice of da late Mare – not the current mayor, but his father, Richard I – who said, “If you’re going out somewhere, and you have a drink, stay home.” He said something like that, anyway.

You can only go through the room so many times. Eventually, I pulled out of the swirling sea of humanity and found a corner.

It was already occupied. By a young African-American gentleman whom I’d not seen at any of the various judicial receptions. A few words established that he wasn’t running for judge; he was running for the State Senate.

I don’t remember the content of our conversation. I remember only that it was cordial, even friendly – qualities which made it stand out from the other forced exchanges one typically makes at these events. We didn’t talk more than five minutes, I suppose; one or both of us had to plunge back into the revolving mass of people. And we certainly didn’t discuss any weighty topics. But I got the impression that this was a nice, smart guy. I wasn’t in his district, and couldn’t vote for him. I’m sure I asked him to vote for me – and who knows? Maybe he did. In addition to this generally favorable impression, I remembered the man’s name. Because it was unusual. And I wanted to see how he did in his race.

His name was Barack Obama. He did OK. 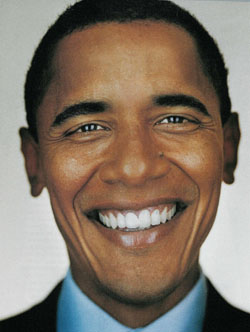 well curmie i certainly would have voted for you. couldn't you have gotten some dead people to vote? i already told you i have a great uncle buried in your fair town, he'd vote for you i'm sure. so that's two, plus, of course, lls and charlie, so that's four. now i would have to move there i guess and i don't know how happy that would make charlie, but those details could all be worked out, ya see? your're almost there.....your honor! bee

What a great story and you tell it so well. Who knows, you may have met the future President of the United States.

Oh yeah, I would have voted for you, too.

"Sometimes being friendless and alone is a distinct advantage." GREAT line.

His name was Barack Obama. He did OK. - - - it is my hope that he continues to do OK... and I loved the moving story and the advice of Da Mare. We lived in Chicago during the Daley years and that was OK with me...

Good story. My mother ran for county commissioner (twice) and state senate once. It is hard, hard work, and can be crushingly sad at the end. But you, I am certain, with the help of LSS and crew, maintained your sense of balance (maybe two houses helped?). And of course, you meet people, which is good, some of them, like Obama, leave a lasting good impression. Thanks, as the social workers say, for sharing.

I'm a little late to this post - just a little. But Time with Shelby highlighted this post recently as one to read so I am doing just that.

This is a great story Curmudge. I love hearing stories about meeting famous people in another time and place when they weren't surrounded by the mystique which they carry in the present.

Hmmm. I must have added you to my reader list after your wrote this post as I don't recall reading it before -and I generally remember what I've read if I start to re-read something. But anyway, as are all your posts, this was a really good and very interesting one. Something for posterity for your kids someday too perhaps as they can tell their kids of some of the things their grandfather did.

Oh by the way, Shelby sent me over here today, in case you hadn't already guessed that.