I was working Wednesday. Really cranking the paper out -- like I should be doing today -- but today I came to work on timesheets.

But, there I was, working, and I thought to myself I'd better check in with Oldest Son. He had mentioned he might need to stop by the office on his way out to our house -- with his seven traveling companions (an eighth would arrive later) -- to fax something. It was around 1:30 pm and I'd not heard from him. I didn't want to leave until I knew whether he was expected. However, I had told Long Suffering Spouse that I'd be home for lunch. I was so certain of this that I took nothing with me to eat. I had already come to regret this rash prediction.

"I'm at home already, Dad," Oldest Son told me, when I dialed his cell phone. "We got here about 15 minutes ago." I terminated the connection and redoubled my efforts at getting out of the office. I got home at 4:00.

Long Suffering Spouse was not frazzled at all; the turkey would be done soon, she told me... and then she found something for me to do.

Which, by the way, I did. Along with the next task, and the tasks after that. So there.

Nearly all of Oldest Son's group was in the basement, taking turns playing a video game that Middle Son had brought home the night before. The exact name escapes me, but it involved clicking on plastic guitars and "hitting" the indicated notes as they came up on the screen. There were two of these guitars. And a whole lot of clicking going on.

A couple of them came upstairs to burn off excess energy by tossing a football around the back yard in the fading light. The twilight may have explained why they seemed to hit the house more than they hit each other. But this did not last long, and they were soon back in the basement clicking with the rest of them. 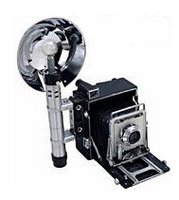 Feeding this small army of Oldest Son's friends was not our only concern this Thanksgiving Eve. For 22 years we have taken our Christmas picture on Thanksgiving Day; this year, since Oldest Son was supposed to leave the house at 6:00 am, that would be impossible. We had hopes of getting the picture taken tonight -- but it would depend on when Older Daughter might arrive.

There was a window of opportunity that would close when Middle Son and Oldest Son went out for the evening. As college students, they'd want to go out just a little after I wanted to go to bed. So there was an opportunity -- and I already knew I'd not be going to bed this night. 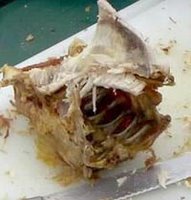 Dinner went well. And quickly. The Domers were like a plague of locusts, consuming nearly every scrap of the 20 lb. turkey that LSS had offered for the occasion. I believe the bones, plates and tablecloth may have been in jeopardy. I did get one slice after they'd all had a first helping... and it was a good thing I'd snuck in when I did or I might have had peanut butter and jelly for dinner.

LSS told me later that one of the boys had confided to her that he'd not been home for Thanksgiving in any of his four years of college -- so he was really happy to have this home-cooked meal.

This was a real Kodak moment... until you considered that this same group was descending on the California home of another of their number tomorrow and had similarly scammed his mother. I chose not to remind LSS of this when she told me the story.

The purpose of this expedition of Oldest Son and his companions was not to eat as many Thanksgiving dinners in as many venues as possible; no, they are attending the Notre Dame - USC game tonight. Whether that game also proves to be a turkey remains to be seen. 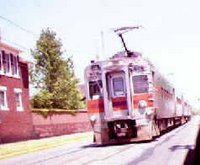 Dinner concluded, the Domers returned to the basement to resume clicking on the plastic guitars. There was still one of their company who'd not arrived; he couldn't get out of his last class or something and had to take the train from South Bend. They would wait to start their nocturnal rounds until he arrived.

But where was Older Daughter? Middle Son told us she'd be leaving Indianapolis at 5:30. We assumed she meant 5:30 Eastern time -- but Middle Son said, no, she meant 5:30 Chicago time. The window for our photograph was growing very, very small.

Then Older Daughter called. It was 7:00 pm or thereabouts -- and she was still in Indianapolis! Traffic had not moved for an hour, she said.

So much for the Christmas picture. "I hope you get here in time for your friend's plane," I said. Older Daughter's companion was a girl she knew from the church choir, maybe a year older; she was flying home to Texas -- and to make certain that she'd be on time, she planned to leave our house around 4:00 am. Oldest Son had joked that he'd be happy to wake her up as he and his buddies were coming in from the taverns.

You can understand why I was going to try and stay awake all night.

But it all worked out. Older Daughter did arrive -- well after her brothers had gone out. We'd bunked her guest in the new den, in a chair that I'd always found ideal for sleeping. Older Daughter stayed with her instead of going up to her own room.

Very loyal -- except that when the girl's alarm began going off at 4:00 Older Daughter shut it off. At least twice. And neither of them woke up.

Fortunately, LSS had the chair in the old den, where I was watching the History Channel from the couch through the back of my eyelids. LSS woke up and shepherded Older Daughter's guest out the door.

And Oldest Son's companions had retired for the evening by 2:00 am or so. Early, I realize, for college students -- but they may have been exhibiting just the teensiest amount of good sense. And Oldest Son -- who was the designated driver as he showed off the neighborhood haunts -- had a bad cold. That may have cut into the festivities.

My original plan was to drive the kids to the train and let them take the Blue Line into the terminal. But service on the Blue Line has been so chancy of late, I thought to take them into the airport myself. 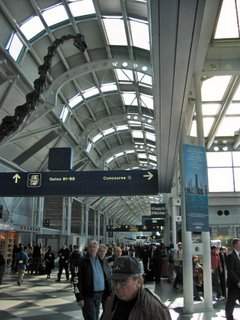 It's a darn busy place, even at 6:00 am on a holiday morning. Well, the Air Canada terminal was quiet. But United and American were doing a landoffice business, with cops banging on the hoods of taxis, hurrying them out of the way. Nine kids exploded out of our van when we finally found a spot acceptable to the gendarme directing traffic -- "a clown car" one of the kids called it, hopefully because of the way it was stuffed with kids. I choose to interpret it that way, anyway.

I hurried home. Long Suffering Spouse would be putting on our turkey in a couple of hours, and we had to ready the house for Aunt Betty.
Posted by The Curmudgeon at 10:25 AM

Holy cow.. I got tired just from reading about all that went on!

I'm smiling. You sound like my dad. A great dad and husband. Then there's the timesheets, also smiling... I bet you're a great boss too. I had one of those til I left to go to law school. He kept asking me if I was sure, was I sure, yes I'm sure, really, why? Well for one I don't want to type (ahem write your) timesheets. What a nightmare. You have my sympathy. "recipt and reivew"; draft documents; corresondence to so and so;...numerous telephone confernences re: so and so... time, date, how long, how many times, what file, billable, not billable, review associates' time = what the bleep were they thinking? They can't charge my client $3,000 for lexis research for a 5 minute question they should know from 2nd year law school. Why'd we hire this person? Why you could do better that that...

Well I believed him, nice guy that he is, and promptly enrolled at law school (I say promptly but that is QUITE a stretch - it's no small task to get accpeted - AFTER you take the LSAT too many times)..I do digress, I've been up all night working on a memo for my legal writing class and see no sleep in the future.

Anyway, yes I'm smiling. My dad's downstairs (we're visiting him and mom this weeked) after dutifuly waiting on me all night... my brother is on his way over... my kids are outside playing... my mom is cooking something great... my boss who I'll always remember is probably doing timesheets wishing he could go home soon.. I'm finally in law school where I am supposed to be and even tho I'm in the middle of a pickle with this assignment and exams in the next few days.... life is soooooo good.

My goodness sounds like a full and complete visit. And you fed the masses!!!

Thank you for dropping by my blog. I value your comments. Ah I think I just need a break. Do some family stuff. I'm a bit burnt out from work right now as well. So maybe a couple of days rest will do me good. Get a better perspective on things. Eldest sister is coming tomorrow. She always cheers me up.

Hope you have a fantastic weekend!

It sounds like you has a real quiet Thanksgiving!

hey curmy! we spent our thanksgiving fighting the noro virus but costa in all it wonder saved us some turkey for when we were will. all is fine now. we are in guadaloupe. sure feels funny to be walking on land, i'm still swaying a little. anyway be well and i'll read the rest when we get back! best to the family.....bee and the sarge...