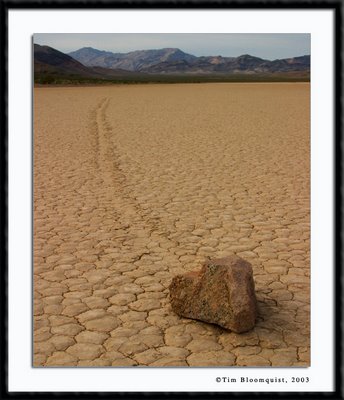 Today's photo was captured from this site.
This picture does not show my Undisclosed Location. Actually, there's no place in Chicago that looks like this, except sometimes my lawn in August... and there's no mountains anywhere near my lawn. But the picture depicts my mental state as this week mercifully draws to a close.... pretty much empty and the end of the line.

I had no Internet this morning (second time this week) and the financial issues that were discussed here yesterday are largely unresolved. And at 4:30 yesterday afternoon opposing counsel in a case called to ask if I could fax him a copy of my brief in our case... a brief that was due yesterday... and that I continue to work on today. Doesn't he know that, to a lawyer, "deadline" means "gee, I better start looking at this, huh?" (You bet he does. But today's a court holiday -- how can you possibly salute our nation's veterans if public employees don't get a day off? -- and I'll bet counsel was hoping to 'work from home' today. There is so much disappointment in the world.)

Because today's a court holiday, I didn't feel the need to wear a tie. But I'll have to make up for that tomorrow, when Youngest Son will be confirmed. Oldest Son will be his sponsor, but he's away at school and I had to fill in for him at Wednesday night's rehearsal. The teachers warned the kids that the Bishop -- who doesn't even slap the kids anymore! -- might ask them a question or two of each of them as he adminsters the Sacrament.

The kids groaned loudly, Youngest Son right along with the rest. I leaned over to him and told him how easy he's got it. I reminded him of how much more work a Jewish boy would have to do for his bar mitzvah. Yeah, he said, but they get better parties after.

I guess there's a trade-off.

Anyway, as soon as the Internet was restored here, Oldest Son IM'd me asking what he needed to wear for the ceremony. "A suit would be nice," I typed back. There was a long pause before he tapped out an acknowledgement. I had just added to the disappointment in his world.

But he'll get even with me: He's bringing one, and maybe two, of his friends to stay overnight with us tonight. Seems some time ago one of his buddies won a one hour 'party' at an Old Town saloon; tonight is the appointed night. The saloon hopes to get people through the doors... and keep them after the hour is up. Oldest Son and his group will probably move on to someplace else. Still more disappointment.

And the best part is that Long Suffering Spouse has no idea we're entertaining house guests this evening. I'll have to break the news to her when school is out. And you know the fate of the messenger who brings bad news....

And while Oldest Son is out nightclubbing, I'll not be able to have so much as a single libation: I have a blood draw in the morning for a doctor's appointment next week.

There's so much disappointment in the world. I hope your weekend is not too disappointing.
Posted by The Curmudgeon at 1:12 PM

charlie cannot post here for some reason, let's see if i can....

he says the answer to your question is robert e lee. the follow up question is: robert e lee and his wife lived on the land, did they actually own it?

does this make sense? bee

Sorry your Internet has been screwed up this week. Please tell us what happens this weekend in your next post. I hope your LSS cuts you some slack, and not your throat when you tell her about tonight:-)

I am feeling your pain, and hope that lss doesn't disembowel you when she hears the news of company! at your house! tonight!


oh myyyyy. I hope it is clean.


and curmudgeon, call in some of those accounts! demand payment!!!

For me, losing internet is kind of like not breathing. Hopefully, the internet problems will not continue. Looking forward to see if there is any/further disappointment this weekend.

Internet problems really stress me out.

I won't say things couldn't get worse because then they always seem to! Good luck with all.

I feel your pain. Hate it when internet screws up. Now about your son coming home with a couple of his friends. First, be thankful he wants to come and to be part of the celebration. Two, consider yourself honoured that his friends would even consider staying...he obviously speaks and thinks highly of his parents! Consider yourself blessed he is coming home.

Have a grand day tomorrow!!!!

I find it truly amazing how we all surf to different places when looking for peace in our own space. Loved the pictures at the reference site....

Curmudgeon hang in there... enjoy the youths... they will make you laugh for sure... give LSS the day off and enjoy the kids... like life and getting older first and smarter second -- - kids grow and fly the nest oh too soon...

Spent the weekend with the grands - played cards, made cookies, had fun - nothing important got done - just laughter... which is why there was only 1/4 cup of milk for husbands cereal snack tonight... oops!

I gave your blog a shout out today.