Blues on the Blue Line 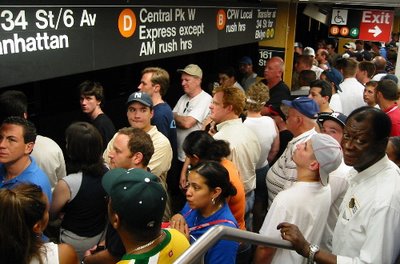 Alright, this is a New York subway platform, not the platform at Clark & Lake on the Blue Line. But the density of the crowd in this photo is similar to that which I encounted at Clark & Lake last night shortly after 6:00 pm.

I needed to get home to take Youngest Son to baseball practice.

Yes, I know it's November. And the temperature outside was in the low or mid-40's. And it was sort of misting -- stuff that would be snow if it were just a few degrees cooler.

But Youngest Son got picked for a travel team a while back and the team practice all year long -- sporadically now, but with increasing frequency and duration as Spring draws closer. (My teams never practiced more than sporadically at Bluejay Park, even just before our seasons.)

Last night we were going to an indoor facility where the team has a membership so that Youngest Son could be evaluated by a high school varsity coach who moonlights at this facility. He used a video camera and computer to show Youngest Son's swing in comparison -- side by side -- frame by frame -- to actual major leaguers. It was pretty nifty. But that's beyond the scope of today's story.

I had hoped it was late enough that we'd be past the peak of our rush hour. But the rush hour never ends if the trains never come... and that seemed to be the situation when I got down on the platform last night. And began waiting with everyone else.

But I did more than wait, too. I began positioning myself. If getting a seat were the goal, I'd take a train going through the Loop, down to Jackson, and barge onto the train there. But last night the plan was to get home, as soon as possible, because I had to be in Wheeling at 8:00 pm. That's a distance from my home. And I harbored some small hopes of eating dinner, too.

I wormed my way through the crowd. And the crowd's luggage.

I live on the Northwest Side of the City and the Blue Line -- the train I take -- goes right into O'Hare Airport. Travelers use it all the time. And many of them have luggage.

Note to travelers: When taking the Blue Line to O'Hare, try and get on one of the front cars on the train. Not because I want a seat in the back -- although I do -- but because the front of the train is closest to the stairs and escalator leading out of the CTA station and into the airport proper.

So I had position now. And I continued to wait.

Eventually, the rumble in the distance and the glow of the headlights of the subway car rounding the curve into the Clark & Lake station told me my wait was over and that -- if I was lucky -- my ordeal was about to begin. 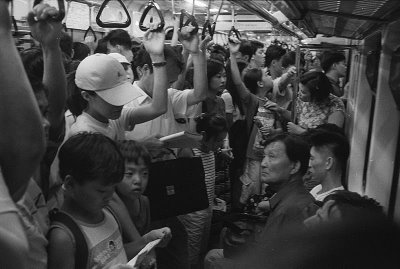 I don't know where this photo was taken. It shows an uncomfortably crowded subway car -- but the car depicted above was deserted by comparison to the car I squeezed onto last night.

If I weren't already a married man, I would have become honor bound to become engaged to at least two other passengers... that's how close we were packed together. And several people on my car had luggage, too.

Still I suppose, despite the resemblance to a college fraternity prank, the crowded conditions last night were better than those on Friday evening.

You may recall how cheerful I was Friday to begin with. Things seemed to be looking up when I got one of the last available seats on a train stopping at Clark & Lake at around 6:15. The kid in front of me swiveled around in his chair and looked at me quizzically: Are you really going to sit there? And I did notice an equally young kid sitting next to me, head lolling to one side and then the other. But I'm sure I don't look particularly dashing when I fall asleep on the subway, as I've been known to do.

At least I thought he was sleeping... until he began to moan.

The kid in front of me whipped around again at this; it occurred to me that they were acquainted in some way. The moans of the kid next to me began to form words: "I think I'm going to puke."

Sometimes one doesn't mind standing up on the train....

And then there was this morning: I'd been running since 6:30, taking Younger Daughter to school, taking the van in for service, dropping Long Suffering Spouse off at her school, taking Youngest Son to the high school where he was "shadowing" today, and returning the car to the parking lot of my wife's school... and then walking to the Blue Line. It's not a long walk.

And I didn't have to be in court until 10:00 am. So I was not too concerned about running far later than usual, even with all of these errands.

A quick search of the Internet will confirm for you the troubles our fair city is having these days with the CTA Blue Line. Years of deferred maintenance have taken their inevitable toll: A recent, well-publicized derailment forced the CTA to establish slow zones along several stretches of the line... and it has thrown the schedule all out of whack. This last bit is not admitted, of course, by the public authorities. But that's why the subway platforms are crowded downtown well after the rush hour should have been concluded. The trains aren't running a schedule anymore at all; they're running in unpredictable bunches.

But one positive aspect of these track slowdowns is that trains coming into the station where I board every morning come in at verrrrrrrrrrrrrrrry slooooooooooow speed. I can hear the warning bell go off, but still buy my paper, get through the turnstile and down to the platform and even down to my preferred car position before the train craaaaaaaaaaaaaaaaaawls in.

And that certainly seemed to be happening this morning. I heard the warning bell, bought my paper, got through the turnstile... but a woman had beat me to the escalator.

It's a narrow escalator to the platform at my stop. There are stairs, but they are located in another part of the station, well back from where the trains stop. There was no way for me to go around this woman. And this woman was not going to move down the escalator.

Even though the train was in the station.

Even though the door closing chime sounded.

Even though the doors closed.

Three trains sped past on the way to the airport before another train craaaaaaaaaaaaaaawled into the station this morning. I was 10 minutes late for court.

I want to thank Barb at Skittles' Place for the "shout out" she gave me on Monday. I checked with some of the young people first to make sure I understood the expression -- and they assured me that this was a good thing: Barb wasn't yelling at me.

So, thanks Barb! Here's a shout out back at you.

Hey.. thanks for the reverse shout out :)

I'm not even sure where I first heard that phrase and it's nothing I would seriously ever say in the world of speaking people.

I suppose people who live with mass transit are used to what you wrote about. It all seems odd to me. Like New Yorkers who take a cab everywhere.

ohhhh, did you get scolded for being 10 minutes late??

I remember the Blue Line at Clark and Lake very well. Traveling on the “L”was fun when I was younger, but as I aged, the romance waned. Taking mass transit was a lot cheaper than taking a cab to O’Hare, or paying for parking—if you I could find parking—when I went shopping on Michigan Ave. I always look forward to your posts. Every time I read them, I’m transported back to my old stomping ground.

Welcome LBP. LBP, Barb -- Yes, the subway is not always pleasant -- but most days it beats driving, and it's less expensive.

And MJ -- The Blue Line goes through some of the hap-hap-happening neighborhoods now so there are a lot of young, attractive people who ride the train. One of our local papers called it the "Love Train" -- and I'm certain that the persons it was meant to describe did not catch the reference (or if they did, thought only of the Coors Light commercials -- dude, I don't know what you're talking about. I never drink beer on the train, man. I'd probably spill....)

And they certainly weren't talking about me in the article.

And, cmhl, no I didn't get scolded. It was a long enough call that I got in before the case was called. But I hate going to court with my sandwiches still in my briefcase!