Why is she so sure? 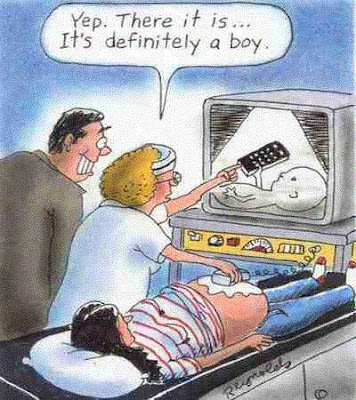 Stumbled upon at this site.
Ultrasounds weren't quite so detailed when were expecting our first child 23 years ago. There was a little tiny screen and the picture was sort of green and white. There was a pulsating bright spot -- the heart, I could tell that much... and little else.

But the woman reading it during the course of our last ultrasound appointment was pretty sure she could figure out the baby's gender.

"Do you want to know?" she asked my wife. But my wife didn't want to know and the exam continued.

I looked at the shifting, seemingly meaningless pattern on the teeny, tiny screen and offered what I was certain were helpful observations. "He sure is jumpin' around in there," I'd say. Or, "he sure is movin' today."

There was one thing Not Then Nearly As Long Suffering Spouse and I knew about this new baby: It would be a boy. All the first borns in our family were boys. I was a boy, for example. And my father -- he'd been a boy, too.

Actually, we didn't go back much farther than that.

But, still.... there was the little old lady test.

As you know, visibly pregnant women can be accosted by little old ladies in any public place. It's the law.

So if my wife was squeezing a cantaloupe in the grocery, a little old lady would feel free to come up to her and squeeze my wife's belly. In much the same way, I think.

"Oh, you're carrying a boy for sure," the old lady would say. "And that cantaloupe isn't ripe yet."

Things like this happened on a regular basis -- with different old ladies and not always with fruit -- and we became persuaded.

Besides, my wife's mother had a dream.

If you can't believe dreams what can you believe?

And, in my mother-in-law's dream, the baby was a boy.

So we knew. We knew.

The woman conducting the ultrasound respected our decision -- my wife's decision, actually, since, looking back, I'm pretty sure I was not consulted -- but after about the 15th or 50th of my helpful comments she did say, "I wouldn't get so used to saying 'he' if I were you."

Email ThisBlogThis!Share to TwitterShare to FacebookShare to Pinterest
Labels: Family, Just for giggles

I wonder if more couples prefer to know or not to know the sex of their baby nowadays?

happy birthday to her!!!

Happy Day!! (female first borns aren't so bad...me, my daughter, my mama, her mama before her...)

when I was pregnant it AMAZED me how many complete strangers would come up and touch my belly...not just old ladies either....

It's amazing how far Ultrasounds have come. All i saw when my 18 year old was being built was what looked like a cloudy sky. When my two year old was in the oven we saw everything, lips, cleft chin, bits and pieces. Amazing.

And I'll tell my mom to stop rubbing bellies in the produce aisle. So sorry.

No, Miss Bee, not Older Daughter's birthday. (She was born on Jack Benny's Birthday.) It's just I saw this cartoon and it got me to thinking....

And, Pilgrim, while the picture resolution has become so much better, my eyesight has become worse -- I haven't seen an ultrasound lately but I'm guessing it'll be about an even trade for me....

This pic is perfect for Robert Scoble and his wife who have just had a baby son which I have written about, he has spent most of the time since his birth on twitter and downloading pics from his mobile. It's a sign of our times.

Hey Curmudge...well my eldest daughter just turned 22, I was never even given the option of knowing...they didn't tell you...and further more...my husband was never present for any of my ultrasounds...again it wasn't the norm...gosh I feel like I lived in the dark ages.....but given the choice I wouldn't have wanted to know the sex of the baby anyways....and by the way...I love the cartoon....

My daughter has her ultrasound this Wednesday. I'll have her ask the technician to look for a remote. :)

I was certain my oldest son was a girl too.