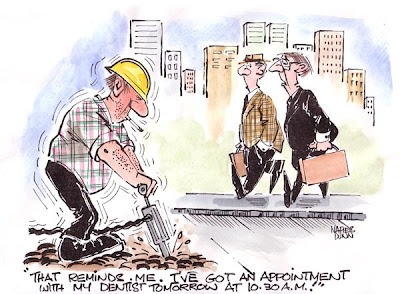 (Cartoon found here.)
I mentioned in my recent "Snow Day" post that the power outages from the storms of August 23 forced the cancellation of my dentist's appointment set for the 24th.

They couldn't reschedule when they called to cancel -- because their entire calendar is on computer.

But the dentist's office called back within a day or two. I was actually at home to answer the phone and I personally made the appointment for this morning.

Total turnaround from making of appointment to this morning no more than 10 days.

(Isn't this exciting so far?)

So Thursday rolls around... and the dentist's office calls back... to confirm the appointment I just made.

I can understand the need of postcards and phone calls to follow up on an appointment made six months' earlier... but for one made a week ago?

I ignored the call.

They called back Friday: If I didn't call to confirm, the appointment would be canceled. Long Suffering Spouse returned the call for me; it had been a rough week, particularly for my wife, and she left a piece of her mind behind on their answering machine.

Note that human beings seldom communicate directly anymore... even over the phone. The person making the follow up calls on the dentist's behalf is not picking up the phone when someone pulls the message off their home machine. The person making the follow up calls might not even be in the dentist's office. So you talk to my machine; I in turn talk to yours.

Whatever my wife said to the machine must have been uncharacteristically harsh: I thought I saw a couple of dagger-glares when I walked into the dentist's office this morning at precisely the scheduled time.

(This dentist has ways of enforcing punctuality. The last time I showed up late for a filling, I was told it was "too late" for painkiller.)

"I mean, c'mon," I told the dentist, although I'm sure it may have sounded more like uhmin kommon, "I just made this appointment a week ago."

"I know," said the dentist, "but you'd be surprised: We make appointments on Wednesday for Thursday and people forget."

I just don't think I'm that far gone. Yet.

So let me ask: Follow up phone calls -- with due acknowledgment to Roger Ebert's copyright -- thumbs up or thumbs down? I'll hang up now and wait for your answers.
Posted by The Curmudgeon at 9:41 AM

you'd be surprised how many people blow off dentists visits...without telling the office

and I'm guessing the call back system is computerized...and a list comes up of who to call and what day...and doesn't note what day the appointment was made. And could very well be a different person.....

As much as I hate to admit it, I'm going to say thumbs up, simply because I rely on those reminders.

i like the reminders too. like this morning i got a call from the surgeon's office to confirm my appointment for tomorrow morning at 9:30 in his office. no, i respond, i don't have an appointment. it seems i do, someone must have told me while i was under last thursday i guess, cause i have no knowledge of it at all but i do want to see him badly to see what the next step is, so there you go... long story to say it's a good thing!

This blogger would like to respond to your post but is currently being deposed for not making his dentist appointment and therefore this automatic reply is being sent as a courtesy.

Please press 'one' if you want to speak to a live operator.

Please press 'two' if you want to speak to a dead operator.

Please press 'three' if it a requirement that our phone representative have a grasp on the English language.

Please note that option 'two' may be easier for us to accomodate than option 'three'.

Please be advised that our current wait time is, well, it doesn't really matter does it?

Thanks for not calling.

I have every intention of remembering every appointment I ever make. I even write them down!

However, there's a 60-40 chance of my not showing up if I don't get a reminder call the day before.

Yes, it's people like me that are the reason for those automatic reminders....

In Malaysia and Indonesia, we don't even use the concept of appointments, therefore, I like the idea of the clinic ringing up to confirm an appointment. To me, itshows that the dentist is serious about keeping on schedule. Thumbs Up for me.

At my company we have a two-fold system of confirming calls - first the doctor's office is called to confirm that so-and-so does have an appointment and then so-and-so is called to confirm that we will be picking them up via wheelchair van or ambulance the next day at such-and-such a time. We have to do it in order for our spreadsheets to flow properly and to keep we dispatchers from jumping out of the window in frustration!

Thumbs up from me for a necessary evil!

My doctor's office, on the other hand, can't be bothered to call me and tell me results of tests, or - if they do, they call and then mumble until they're cut off and I have no idea what they've said. At 4:59 and their office closes at 5:00.

I am old enough to like and need reminder calls. I don't get them here and I have missed several appointments--including once showing up an hour early and a day late. Each time I miss it costs £10. Ouch!

A dentist appointment shouldn't be ignored like that and vice versa. If a patient is already at the office, then the service should still go on even the dentist is away. Well, that's the job of the dentist's assistant! ;)