So -- my wife came at me with a scissors over the weekend....

I bet that got your attention, eh?

It sure got mine.

As a few of you may remember, I didn't shave while I was hospitalized earlier this year. Even a week's growth of stubble is too much for the gossamer strands of tinfoil that pass for today's razors, so I let the beard grow out after I got home. Truth be told, shaving would have required too much effort at that time even if I'd had a razor up to the challenge.

Fast forward a few months: I like the beard. Sure, it's practically white around the muzzle, just like you'd see on any old hound dog, but the mutton chops contained some of the darkest hair on my head. There were also, on close inspection, strands of hair with every color in between white and dark. This was among the objections to the beard cited by family members. 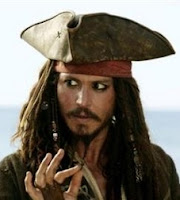 But mine was a real beard, not a wispy, wimpy beard like that on the swishbuckler, er, swashbuckler at left. (Happy International Talk Like a Pirate Day, by the way.)


Aside from it being a coat of many colors, the other objection raised was that I wanted to grow it too long. The family, it seems, thought that I wanted to grow it out like this fellow on the right. 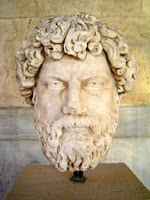 But my vision was for the beard to look more like that on the fellow on the left.

Well I see a difference.

Anyway, I thought, with the passage of time, the family had come to accept my beard. Though Long Suffering Spouse still exhorted me to keep it trimmed, the other members of the family no longer expressed opinions.

And then came Sunday.

"You can keep the beard," Long Suffering Spouse was telling me for the 500th time, "but you have to trim it so it looks neat. Who wants to hire a lawyer that looks like he just escaped from the 60's?"

She was brandishing a scissors at this point so I prudently refrained from engaging in any snappy repartee.

"Here," she said, "let me help." She raised the scissors.

Readers over the age of 12 will be familiar, I'm sure, with the old Dining Room Table Sketch. That's where the dining room table is found to be wobbly and the clown (or baggy pants comic) flips the table over and saws of a little bit from each of the three longer legs... only to find, of course, that he'd overestimated. And now one leg is too short. The process is repeated. And repeated. And repeated -- until the table becomes nothing more than a plank on the floor. Done well, this is very funny. Every single time.

This ancient scene, with my beard in the role of the dining room table, was played out in our bathroom Sunday morning.

I was not actually flipped over during the process.

But, when these tender ministrations were at an end, I looked like I'd developed a case of the mange.

So shaving became the only option. I'll spare you the details, but after awhile the job was done.

And, lo and behold, the family rejoiced. My mother-in-law looked quite pleased when she saw me at church later Sunday morning. And my kids were thrilled. Middle Son even called last night from school. "Yo, Pops," he said, "I heard you shaved the beard. Great!"

It apparently was not as accepted as I'd thought.
Posted by The Curmudgeon at 8:45 AM

well good. for some reason i cannot stand face hair curmy. never could. my (wayward) son has a goatee and i think it makes him look like a goat. yay to lss!!! oh, and arrrrr.

The biggest problem with growing a beard was that I couldn't grow a full one until my hair turned gray. But now, my chin, or chins, haven't seen the light of day since Thanksgiving 1994.

My husband has a full beard and I think it looks sexy. Sorry about your loss.

I imagine you looked very distinguished. I hope you took some pics as a reminder.

Isn't there a law, regulation, rule or custom that requires a curmudgeon to have facial hair. I swear I read one somewhere.

I'm looking forward to the post that regales us with your adventures pre-dawn (as the daylight hours shorten) scraping away at, well, that's your post.

I was going to say something similar to what Katherine already said but it had more to do with joining the band and going on their road tour with them ... guess that's out of the question now, isn't it?

Just remember, though, "women go crazy for a sharp-dressed man" and clean-shaven doesn't hurt either!