Hey hey, holy mackerel, no doubt about it, the Cubs are on their way

Old people, like me, will remember that as the anthem of the 1969 Cubs. My sister actually bought the 45.

I listened to a couple of Cub games that year on the radio, too, but I felt dirty and ashamed and I never did it again.

OK, I did watch the 2003 NLCS -- but it was the NLCS, please, and Ozzie Guillen was the Marlins' third base coach.

Anyway, maybe Cub fans wouldn't want me remembering their theme song from 1969. Things didn't turn out so good for them that year, now that I think about it.

There is one thing, however, I must make abundantly clear. I am certainly not jumping on the Cubs' bandwagon. Still, I think this could be their year. 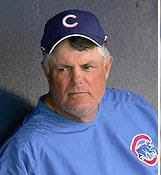 I like Lou Piniella; I liked him when managed Seattle and Tampa Bay. I think he's a good manager and the Cubs are lucky to have him.

And, in the weakest division in baseball, it looks like he's going to bring his team, with its gazillion-dollar payroll, in ahead of the Brewers.

Cub fans are suspicious when White Sox fans, like myself, don't spew hatred in their direction. There is, of course, the good-natured ribbing that we give Cub fans, like in these words to the pub song, "South Side Irish":

And when it comes to baseball, we've got two favorite clubs:
Our beloved Go Go White Sox -- and whoever plays the Cubs.
But, sure now, that's just for fun. We Sox fans aren't trying to jinx the Chubbies by saying they're going to hold on and win that division.

Even though they lost last night.

To the woeful Marlins.

Hey, nobody seems to have clinched yet in the entire National League. (I think I looked at the NL standings this morning for the first time all season.)

I have no rooting interest either way. If Philadelphia gets in, of course, I'm rooting for Aaron Rowand. White Sox fans remember him fondly.

But I'm much more interested in what happens in the American League.

Dr. A, Fran, 74WIXYgrad, and Misty Dawn will be pulling for Cleveland. Ralph will be pulling for the BoSox, and so will Patti and Ben and Bennie and RDL. (Rhea is in Boston, but I don't think she has ever mentioned her undying allegiance to the Carmines, which is kind of unusual for folks in that part of the country.) I don't think I have any Angels fans among the regulars here. But I will root for any and all of these... against the Yankees.

The prospect is simply too awful for a White Sox fan to contemplate. But I wish them no ill.

Honest.
Posted by The Curmudgeon at 4:41 PM

Now you know you'd root for the Cubbies over the hated Steinbrenners. Just because of Lou. And yeah, I think he's a great manager too. Remember early in the season when he had the huge meltdown and was kicked around by the media? That team has been good ever since.

Thanks much for the mention, Mr. Curmudgeon, sir.
I am pulling for the Red Sox because:
a) Ralph likes them;
b) they're not the Yankees; and
c) I went to college in Massachusetts.

I saw a New Haven Ravens (AA) game once. And a Bridgeport Bluefish game. (independent)

Miss Bee is going to ask you if this is about sports. ;-)

Curmy, I like the AL, but don't automatically dismiss the NL...at least the pitchers get their at-bats in the NL. t is fun to watch AL pitchers who never swing their bat in the regular season swinging away in the world series...

this is sports again, i know that much for sure.

If the Indians get in, C.C. Sabathia will get one start the N.L. park. C.C. has a couple of home runs against N.L. pitching.

One thing that the skankees have going against them is A-Rod. It's been a real long time since the team with the highest paid player has won the World Series.

"Carmine," I'm told, is a particular shade of Red -- "Carmines" being another nickname for the Red Sox -- at least according to White Sox announcer Ken "Hawk" Harrelson. The Hawk played for Boston in 1968, and parts of the 1969 and 1967 (pennant winning) seasons.

Ken Harrelson also played for the Tribe from 1969-1971. He talked a better game than he played and that's why he is a somewhat good announcer.

Me, now that all sports in Georgia have imploded except, possibly the Dawgs, my choice is the Phillies and the Indians. A pretty good team and a solid team. No one will watch it. I could live with Boston.

Anyone looking for a cornerback and a somewhat tainted quarterback? Not that I have the authority, but you can have both for a number two starting pitcher for next year.