That's what I called it last year in this post when I started ticking off the lessons that I thought we should have learned from 9/11/01. Let me summarize:

First, I said, good communications are vital. And "official channels" alone are insufficient. Flight 93 never reached its target because people used their cell phones. They found out something of what was going on outside, enough to know that the hijackers were going to kill them, notwithstanding any promises they'd made. So they tried to take the plane back. It didn't work -- but the hijackers did not reach their target.

But have we learned this lesson? No! There was a brief moment in the past year when it looked like the government would finally allow in-flight cell phone use -- but it passed and the ban still remains in effect.

Look: I don't want to hear you tell your mother about why your husband is a jerk all the way from Chicago to Los Angeles. I don't want you to compare details of your recent operations with your best friend. I want to read my book in peace and quiet -- but if some morons try and restage multiple hijackings, and it's hit the TV, I want someone to call me -- or you -- so we can prepare to do something about it.

The people on Flight 93 did something about their situation, and they might have lived if they'd done it sooner. They surely saved many others by their actions.

The second lesson, I suggested last year, is a subset of the first: When disaster strikes, government should strive to facilitate good communication, not control it or shut it down. The bureaucrat's first instinct is to stamp "top secret" on everything, and worry about what should be disclosed later. And that's wrong. Mushrooms and terrorists thrive in the dark -- and shrivel in the light of day. There's a lot of misinformation that comes out in the first hours after a tragedy (Katrina provides a more recent example) -- but information should be seen as a river rushing by. We can pluck from the rushing stream morsels of the truth. Historians can figure out what it all meant after the fact.

I was more timid last year: I said only, "I don't think these lessons are accepted by our government."

I'm less timid now -- because another year has gone by and this guy is still at large:

The picture on the right is from the new video making the rounds. Apparently he can get "Just for Men" hair color delivered to his cave in Pakistan.

Being at "war" with a concept or an ideology makes no sense. I suppose this is the inevitable consequence of sloppy talk from the '60's -- the War on Poverty -- or the 70's -- the War on Drugs. Those aren't/weren't wars either.

We also fought a war against Iraq. Despite White House efforts to link 9/11 with Saddam Hussein's despotic regime, we really went to war against Iraq because we thought Iraq was on the verge of developing nuclear weapons. We weren't the only country to think so. Most governments in the world believed it. 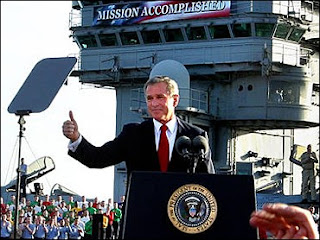 Oh, I know it's fashionable now to sneer at the President's presumption in announcing "Mission Accomplished" on May 1, 2003.

But the war was over.

What we've bungled is the peace. Mr. Bush and his advisers set the stage for the current national frustration when they refused to listen to their own experts about what sort and what size army would be necessary to occupy Iraq. To police it.

And we still say that we're at war with al-Qaeda. Perhaps we say this because foreign "police actions" acquired a bad odor in this country... because prior administrations could not bring themselves to admit that their "police actions" (Korea, Vietnam) were really wars.

But we never were at war with al-Qaeda: Bin Laden and al-Qaeda control no country (at least not since they were kicked out of Afghanistan). They wear no uniforms. They have no capital. They are criminals. Criminals who can and should be brought to justice by police action.

The sovereign nation of Pakistan does not want American troops to cross into its North-West Frontier Province and flush out bin Laden. That would be a gross violation of its sovereignty. And we can't afford to alienate still another ally. But might Pakistan not agree to a police action, led by the FBI, to capture him? Surely some military hardware and personnel would be involved -- but it would be a civilian operation conducted with due regard for the sovereignty of that nation. But we apparently haven't even asked if this would be possible. And Pakistan grows more unstable every day.

In our secular Western eyes, bin Laden is just a criminal. He has violated the laws of our country.

But in Muslim eyes there is often no difference between the laws of a country and the laws of God. Here again, though, bin Laden is a criminal. And also an apostate. A heretic. He is trying to pervert an entire world religion to bring him an earthly kingdom -- a restored caliphate. With Osama as Caliph. Or at least the power behind the throne. (I suppose if he fulfills this ambition, then we could be at war with him. But I'd rather not wait for that, thank you.)

The current administration has wasted a lot of legal talent in this country trying to blur the distinctions between interrogation and torture. That talent would have been far better spent preparing the brief against bin Laden. The Qur'an provides ample precedent for our case. We should present it to the Muslim world.

In the meantime, good police work will prevent another 9/11.

And, I pray, this will happen soon.
Posted by The Curmudgeon at 8:50 AM

Email ThisBlogThis!Share to TwitterShare to FacebookShare to Pinterest
Labels: Roadkill -- politics in the middle of the road, Soapbox

I bet many share that prayer. I know I do.

my daughters contention is that cell phone TEXTING should be allowed...she doesn't want to listen to inane conversation for four hours either.

I support any action to bring Osama bin Laden to justice. And I do not believe the American public...let alone the media need to have the details of every convert operation we undertake.

Katherine -- I don't believe every police raid is announced in advance nor do I claim it should be. When I talk about letting information flow freely it's in the immediate aftermath of an event, not during the planning and preparation of an arrest attempt.

I am a 2 tour Vietnam Veteran who recently retired after 36 years of working in the Defense Industrial Complex on many of the weapons systems being used by our forces as we speak. I believed another Vietnam could be avoided with defined missions and the best armaments in the world.

It made no difference.

We have bought into the Military Industrial Complex (MIC). If you would like to read how this happens please see:

Through a combination of public apathy and threats by the MIC we have let the SYSTEM get too large. It is now a SYSTEMIC problem and the SYSTEM is out of control. Government and industry are merging and that is very dangerous.

There is no conspiracy. The SYSTEM has gotten so big that those who make it up and run it day to day in industry and government simply are perpetuating their existance.

The politicians rely on them for details and recommendations because they cannot possibly grasp the nuances of the environment and the BIG SYSTEM.

So, the system has to go bust and then be re-scaled, fixed and re-designed to run efficiently and prudently, just like any other big machine that runs poorly or becomes obsolete or dangerous.

This situation will right itself through trauma. I see a government ENRON on the horizon, with an associated house cleaning.

The next president will come and go along with his appointees and politicos. The event to watch is the collapse of the MIC.

I did not mean to imply that YOU felt every raid et cetera should be announced.

I was reacting to a post on another blog...I should have made that clearer.

Nodding in agreement over here, as usual.

P.S. I would totally wear a "Curmudgeon for President" button.

Let's hope we never have another anniversary like this one though I'm just not at all sure that will never happen.

I don't understand that level of hatred that causes one man to want to wipe out another. I'm glad I don't.

What we've bungled is the peace

I couldn't have said it better.