My friend Steve called yesterday morning -- a glorious Fall-like Sunday morning in Chicago -- with an offer I wouldn't ordinarily refuse: A chance to go to the White Sox game.

Sure, the Sox have played miserably this year, but the Angels were in town so I could see one playoff team at least -- and I'd have a chance to witness history: Jim Thome was going for home run no. 500 -- again -- yesterday.

But I turned Steve down. 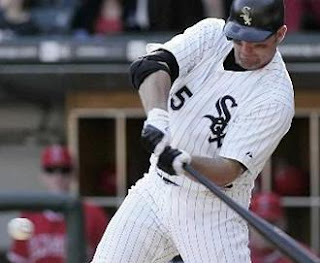 I switched from the Bears game to the Sox Post-Game show in time to watch Thome's interview: Yes, I wasn't even watching.

This morning the Sun-Times said that Thome has hit 70 homers in a Sox uniform, 96 while a member of the Phillies, and 334 while a Cleveland Indian. My perception is that he hit at least half of those home runs against the White Sox.

Even though the Cleveland fans still boo him, when Thome goes into the Hall of Fame, his plaque will probably show him in an Indians hat. As it probably should.

I like Thome; everyone likes Thome, except when he's beating you. But... it would have meant so much more if it had been Frank Thomas hitting his 500th home run this season wearing White Sox colors -- instead of Toronto's. Big Frank was our guy; Thome's just visiting. (Mind you, Thome's a really, really welcome visitor. And I hope he stays a long time....)

Tom Seaver won his 300th victory in a White Sox uniform. But does anyone remember Seaver as a member of the White Sox?

I rest my case.

so that means you should have gone, right?

Jim Thome knows he will get some boos when he goes to Jacobs Field. Nowadays it's about 50-50.

But the intelligent fan knows that signing him would not have the smartest move at the time, and when Philly wanted to trade him back, the price was too high.

In the back of my mind, I think Thome will end his career in an Indians uniform.

BTW we may need the Sox help next weekend against Detroit.

As a consolation prize, we will let Chicago take credit for Albert Belle.

I got to thinking after "Joey" wore out his welcome in Chi-town, he went to Baltimore. Because of Cal Ripken Jr., he had to change his number from 8 to 88.

Now in NASCAR, it seems that Dale Earnhardt Jr. has to do the same thing. I'm not a Junior fan, but I hope that Albert didn't cast any bad omens over a number change like that.