The movie trailers which were parked on a lot only a block or so from my Undisclosed Location are gone now. Those were for The Dark Knight, that being the working title of the latest installment in the Batman franchise. That movie was filming here in Chicago for months. 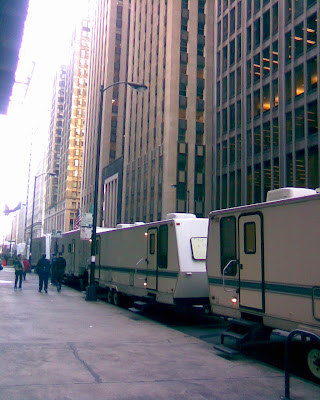 I saw these trailers parked a couple of days ago as I was running errands in the Loop.

This is taken from Monroe Street looking south on Clark, toward Adams. At the far end of this line of trailers, presumably invisible even to persons with good eyesight, was a tall, middle-aged man, wearing a jacket with a walkie-talkie clipped on and looking -- well -- kind of bored.

I asked him what movie these were for and he told me, in a voice that left little doubt that he'd answered this question far too often already, that the movie being filed was Family Practice, a made for TV movie starring Anne Archer and Beau Bridges.

In the movie (according to IMDb), the City of Chicago will play the part of Philadelphia.

No casting director approached me as I loitered in the street.
Posted by The Curmudgeon at 11:07 AM

It looks like you live in Hollywood, not Chicago.

that is so funny curmy!

i'm glad the casting director didn't approach you...i would rather call you a blogging friend than a snob hollywood star :)

Have a great weekend!

Just a small role, an extra, would be great fun for you.

I remember waking up at 4am to go loiter in a street that I knew Jacky Chan was shooting a movie. Ended up being an extra. However, I have looked and LOOKED and still haven't found myself. I guess I got cut after all....

I have a real life video posted today.. come see! :)

I just don't know I mean, will it say in the credits... Philadelphia...... Chicago

I guess Philadelphia just isn't as Philly as Chicago.

Movie shooting sounds like fun even in the odd way of making Chicago into Philadelphia. Why not just change the script? But then I never did understand the techn ology behjind the magic screen.