A cartoon that explains an awful lot

And I do mean awful.

But then came 2005. And I wasn't suffering anymore. Although, like a lot of Sox fans, I could hardly believe it was real.

And there were some wonderful moments in 2006, too. I'll always remember that, in 2006, my Oldest Son took me to a game. And then the Sox fell short. In this post I explained how I had finally accepted the reality of 2005, and how I was finally "ready to sit back, relax and enjoy the ride back to the postseason." But, sadly, the moment had passed. And soon thereafter also passed the crown. (Lucky John Rooney: He got to call the entire season for the team that won the World Series two years in a row.)

But disappointing as last year was, this year has been... well, awful.

And I've found this cartoon which entirely explains my own feelings on the subject: 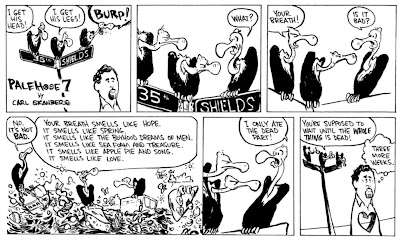 This is taken from a blog called Palehose 7 by Carl Skanberg.

You don't have to be a Sox fan to 'get' this cartoon. Everyone recognizes Ozzie Guillen when they seem him, right?

Wait 'til next year!

And next out of the closet of anxieties: Bears vs. 'Bolts. Live from San Diego Sunday afternoon.

I've got a bad feeling about this, Chewy.
Posted by The Curmudgeon at 11:07 AM

One thing you've got going up there, versus down here, until lately down here, is that your team disappoints less regularly. We have spent almost two decades of just not quite getting there.

this is sports AGAIN, right curmy? that's what i thought...

"Wait till next year" is a good motto to have.

So now you can root for the Diamondbacks, right?

(at least until next year).

Still, the Red Sox have been a much bigger disappointment over the years. At least they have much better starting pitching these days. But I still look at them being only 5-1/2 ahead of NY, but with 18 games to go, can they hold on? I do understand your frustration, for probably as long as you with the Chisox. If everybody loves a winner, as Sari thinks, 3he D-backs in first in the NL West, 3 ahead of the Padres. Anyway, I do like that in the NL pitchers have to swing a bat occasionally...

Jean-Luc -- Wait 'til next year becomes a sad refrain for lifelong Chicagoans... on either side of town.

Ralph & Sari -- I haven't watched the D-backs but I'll watch them in the playoffs. But root for them? Well, I root for the American League team in the World Serious every year... unless it's the Yankees. Then I root for the NL team. Unless it's the Mets. Or unless... no, the Cardinals will win that division and I won't have to deal with that... I hope....

Well I'M rooting for the D-backs, they're my team! ha ha