Younger Daughter, meanwhile, doesn't mind the idea so much... since she'd be given a daily opportunity to cruise the parking lot of Youngest Son's all-boys Catholic school on her way to her own all-girls Catholic school. After all, prom is only nine months away. And Homecoming is in two weeks!!!!

(It's difficult to render the shriek of a teenage girl in print, isn't it?)

The only one who has real reservations about this plan is me.

Younger Daughter can't take the bus because she has Orchestra class that meets at 7:00am -- before school. And the bus doesn't get there before 7:20 -- and sometimes not until 7:40, barely enough time to make it to the first class period of the day.

"Why?" we ask. Why be in a situation which is unpleasant? Younger Daughter plays the trumpet -- but she doesn't take it that seriously. She practices guitar (for which she receives no academic credit) an hour or more a day, perfectly happy to play songs by ear -- with the guitar upside down and backwards -- and she's become quite good at it.

But she won't take her trumpet home to practice without a court order. And maybe not even then.

This same trumpet that we paid a king's ransom for just a couple of years ago.

(And I weep softly.)

The teacher, in such cases, believes (probably with good reason) that the student would do even better with practice.

In any event, the unpleasant feelings between the music director and Younger Daughter got so intense last year that the school counselor got involved.

But Younger Daughter says she is determined to finish Orchestra this year.

And, finally, it occurs to me why she is so determined: I have to let her drive if she continues in Orchestra.

If she quits, she thinks I'd make her take the bus.

I am nervous about her driving every day. I drove with her while she was accumulating the hours necessary to take the driver's exam. She hasn't driven that much since getting her license -- preempted by my health and then by older siblings home for the Summer. And though we're driving with her again (even Long Suffering Spouse has taken a couple of turns in the passenger seat) and Younger Daughter really isn't doing badly... well, the car is too new and I am too old to let her drive every day.

It's not that she's a bad driver... it's just that she's inexperienced. She may not react in time or react properly when some truly bad driver does something stupid. That wouldn't be her fault... but we'd have a problem just the same.

Besides, I have a vivid imagination. 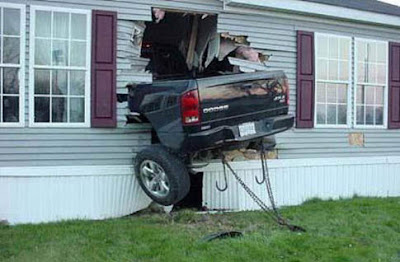 Too vivid, really, for my own good. 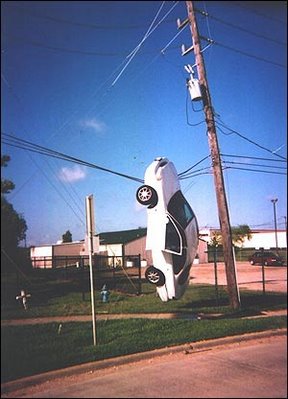 Would taking the bus really be so uncool if the kids actually paid for the gas?

Since I'm first, I'll wait to see what someone else says. I'm actually petrified of the idea of my kids driving.

Interesting photos there. Hope you didn't know the drivers.

I love the photos you choose to go with your posts!

Nine asked Mr. Geek and I last night who was going to teach him to drive? God help us, at least we have another 7 years before that happens.

And as for rendering the scream of a teenage girl - I would do it like this:

(of course, with proper italics and bolding, which I still can't figure out how to do in a comment).

By the way, gas is about $9.5 dollars a gallon here in England.

smart one you got there....figuring out that she has to have the car to take orchestra...

does she have a cell phone for emergencies while driving....weren't you the one who posted about kids and cells? laughing...

Patti -- No, I didn't know the drivers... these were pulled from other sites initially and other posts here... just because they seemed to fit the point so well.

Sari -- careful -- If I took you up on this would you read such a rendering? Would anyone?

Yeah, Katherine. I'm going to lose that battle, too. Probably this weekend. But she needs a phone if she's going to drive, right? And she has to drive if she takes Orchestra, right? Aaaaarrrrggh.

i remember i used to LOVE to drive to school in high school, didn't get to very often but when i did i piled the car as full of kids as i could and we went riding...

Trust me, I am quite familiar with the scream of a teenage girl but I believe it is now called a "squee" rather than a scream. At least that's what emits from Amanda when she gets excited.

Poor Curmy! I was going to say let her drive until I read about her inexperience.. and snow is just around the corner. (My kids hated me sometimes lol)