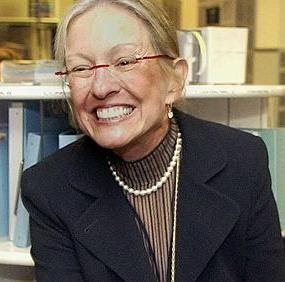 Popular nursing blogger (and my blogfriend) MJ has mentioned, from time to time in her essays at Nurse Ratched's Place, that she is looking for a new job.

Pictured above is Ann Lurie, one-time intensive care nurse at Children's Memorial Hospital in Chicago. The Sun-Times ran this picture this morning because Mrs. Lurie came back to the hospital yesterday -- announcing plans to donate $100 million toward construction of a new children's hospital. Children's is moving from Lincoln Park to Streeterville (near the Northwestern medical campus) and, when it moves, it will be renamed the Ann and Robert H. Lurie Children's Hospital of Chicago.

Ritter's article this morning says that this is the biggest gift ever "to a Chicago hospital and the largest gift to any children's hospital anywhere."

That fellow on the left isn't me, but I'll borrow a page from his book and suggest that MJ might follow in Mrs. Lurie's footsteps and become a phil--, a philan--, a good deed doer.

There are any number of charitable trusts that have been established for various reasons as our population ages. Mrs. Lurie, herself a nurse, and a former member of the Children's Memorial Hospital board, was well-versed in the needs and virtues of that hospital. But, seriously: Who helps a well-meaning but less-well-connected donor sift among all the charities, worthy or otherwise, that clamor for donations? How about becoming a consultant to charitable foundations, MJ?
Posted by The Curmudgeon at 8:33 AM

she is one rich nurse. or i mean VERY rich.

Great idea, Counselor! I’m full of good ideas, and I enjoy telling people what to do. Just ask my husband. He lovingly refers to me as, She Who Must Be Obeyed…..or else! Thank you for your great suggestion.

I noticed that Mrs. Lurie is no longer a nurse. That would explain how she came into all that money.