Bears disintegrate on national TV... but it's not all QB's fault 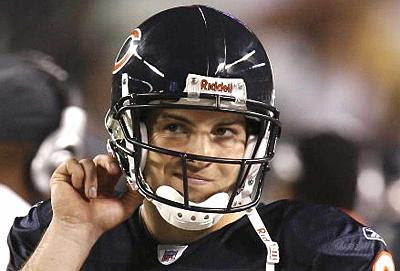 You might not be able to hear it today over the shrieks for this guy's blood, but what knowledgeable football fans should be talking about today is that last night's Bears-Cowboys game was lost when Cedric Benson plunged into the line for two yards -- and lost the ball. Bad as they were, Rex Grossman's last two interceptions were as much the product of desperation as anything else. On the other hand, when Benson fumbled, the Bears were only down 17-10. Even after that mishap (which resulted only in a Dallas field goal) there would have been plenty of time to come back if the Bears had a running game.

But they don't: Benson's fumble didn't prove it -- it merely provided the exclamation point. 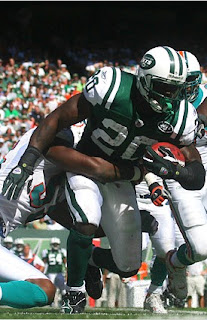 Meanwhile, in New Jersey, this guy, Thomas Jones, the man the Bears chose to discard in favor of the aforementioned Mr. Benson, ran for 110 yards on 25 carries.

There is a falloff that many teams experience after losing the Super Bowl, and the Bears, apparently, will share in that experience. They're not just experiencing a falloff -- they're plummeting.

But it's not all on Grossman.

And, anyway, what else should you expect in a year when the Cubs might win their division?

The world is indeed turned upside down.

had to get in a sports one, didn't you? ha ha ha

I didn't know other sports were being played yesterday.

The Bears had to lose so the Cowboys fans could all go ape over their new superstar, the QB God, Romo.

Because hey, he hasn't played a full season yet, but clearly he's the next Brady.

Anyhow, I noticed fans love trashing their QB's, from McNabb to Grossman to, wait, has anyone trashed Brees yet? Last night's game was demoralizing if you were a Saint's fan.

But, Dallas kept Bledsoe forever, so maybe they won't throw Grossman out, maybe they will get their act together still... mayyybbeee....

It doesn't matter, though ;) I'm betting the Cowboys and the Pats make the superbowl. Yes it's way to early to shout about it, but hey, I'm an optimist, and both teams are 3-0.