The Moon belongs to Asia? 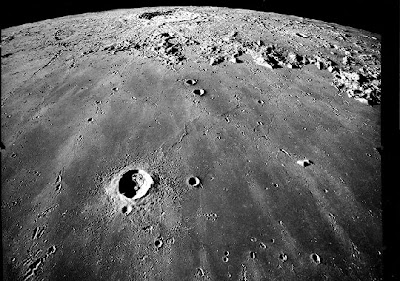 In the real future it might be Iowa farm boy James Tiberius Kirk who mans the helm while Captain Hikaru Sulu holds down the center seat, cursing Klingons in Japanese. Jean-Luc Picard might grow up in France... but speak Mandarin. Or maybe Hindi.

These thoughts crossed my mind yesterday after I read Anil Penna's AFP story posted on Yahoo! News. (Here is a link to the story on Discovery Channel News; this link may last longer.)

A new space race is underway -- and America isn't in it.

The linked article reports that Japan successfully launched a lunar orbiter on September 14.

Penna adds that China is expected to launch its own moon probe, Chang'e 1, before the end of the year, and India will follow, with Chandrayaan 1, in March or April of 2008.

Japan's space agency, JAXA, plans a number of robotic missions before sending an astronaut, according to the AFP story. The key here is that Japan is planning to send astronauts. And so are China and India.

G. Madhavan Nair, head of the Indian Space Research Organization, is quoted in Penna's article as saying, "It will take seven or eight years," before India will be ready to send people to the Moon. "We are in the process of sharpening our ideas."

Read the article: The Asians are planning to move to the Moon and exploit it. To see if its mineral wealth can provide solutions to our problems here on Earth that our muddleheaded, short-sighted, fear-riddled politicians can't even imagine. And, no, this is not my interpretation of what the Asians are doing. It is what they in fact proclaim to the world that they are doing: Penna's article quotes the head of JAXA, Keiji Tachikawa, as flatly stating, "The moon is no longer a place for us to visit. We should consider inhabiting and exploiting it."

Oh sure, as the AFP article also noted, President George W. Bush in 2004 announced an ambitious plan for America "to return to the moon by 2020 and use it as a stepping stone for manned missions to Mars and beyond."

And I stand by this gloomy prediction even if (maybe even especially if) the next President, by some chance, turns out to be a Republican.

The Western nations are determined to delay space exploration. Franco Bonacina, a spokesman for the European Space Agency, is quoted in Penna's article as saying "humanity is a 'couple of generations away' from tapping commercial opportunities in outer space, including the moon."

But this is apparently not the prevailing attitude in Asia.

Oh, sure, you say: America began space exploration. It is America's New Frontier. The other nations are merely playing catch-up.

And, once upon a time, Spain and Portugal, smug in their discoveries outside of Europe, divided the world between themselves.

And along came the British and the French, rising nations then, and took most of it away.

America: We're about to become a really big Portugal.
Posted by The Curmudgeon at 8:40 AM

Email ThisBlogThis!Share to TwitterShare to FacebookShare to Pinterest
Labels: Final Frontier, News and Views, Roadkill -- politics in the middle of the road, Soapbox

drat! now the moon will have lead paint all over it!

It's sad, but it's true. The rest of world will leave America behind as America (read as corporations and government) wallows in greed and stifles innovation.

A sad state of affairs indeed.

I have a very good blogging friend called Q9 who will be interested in this, he writes about astronomy and aligned topics every day. I shall forward him the link.