Memories of riding the school bus 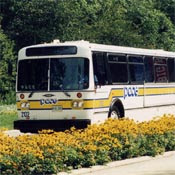 My rant about my high schoolers taking -- or, rather, not taking -- the bus got me remembering.

At right is the kind of bus they would take.

If they took the bus.

But I suppose that's not the picture that comes into your mind when you think of taking a school bus. 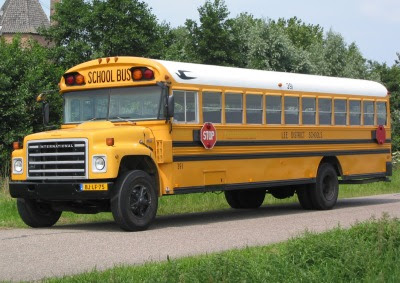 This is the kind of bus I took nearly every day in high school.

The bus came by our house at 6:50am. We had to be out at the corner or the bus would pass us by -- there was none of that stopping in front of someone's house and honking the horn.

The bus driver's name was Kim. Kim had long, golden hair -- not platinum -- more of a brassy gold, but falling straight all the way down Kim's back. A lot of girls would have killed for hair like that in the early '70's -- but they wouldn't have wanted Kim's beard. Kim, you see, was a man. 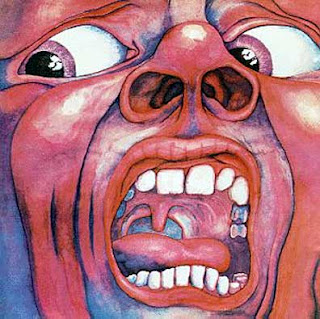 Kim drove a standard issue, yellow school bus. But it did have a giant speaker in the front of the bus topped by an 8-track player.

There's nothing like listening to King Crimson's "21st Century Schizoid Man" at threshold of pain volume at 6:50am. Or "Yer Blues," from the Beatles' "White Album." C'mon, sing along with me now: The eagle picks my eye / The worm he licks my bones / Feel so suicidal / Just like Dylan's Mr. Jones....

Or eating again any time soon?

One time, toward the end of my senior year -- maybe even after classes were completed -- I was at a local deep dish pizza joint, having beer and pizza with the rest of my honors English class... and our teacher.

(I forgot to shoo the kids out of the room this time, didn't I? Yes, this would have gotten the poor man fired today -- but he was a wonderful teacher. And this was over 30 years ago. Things really were different then.)

Anyway, there we were, the über nerds and our teacher, and I spotted Kim the bus driver at the bar by himself.

Not me, you understand: I rode the bus.

I invited Kim to come over and join our group.

And it got a bit awkward when he started groping the head cheerleader with one hand and the Student Council Secretary with the other. But they quickly disabused him of whatever notions he had and the party continued without further incident.

I've always liked bringing people together....
Posted by The Curmudgeon at 9:27 PM

Funny! Yes, things were alot different when we were growing up!

My kids bus driver in elementary school was named Mrs. Pugh.....Yes, many jokes were made by the kids, but you wouldn't dare do it to her face.

A favorite bus driver when I was in school was named "Cooter". Cooter Green is a legend in the town I grew up. He must be 200 years old by now and still driving a bus.

A great memory of school buses. Listening to fab progressive music was quite a learning experience.

Now why do I have Weird Al Yankovic's "Another One Rides the Bus" stuck in my head?? Must be trying to flush out those Beatles' lyrics!

I spent my entire high school career riding the bus unless my cousin was occasionally allowed to drive and it was a long, long ride as my high school was 15 miles away from where I lived. Worse thing was, I couldn't even read to pass the time as I would get motion sickness if I even thought about looking at something with words printed on it! Ah yes, memories light the corners of my mind!

Ah, yes.. the big yellow school bus! I rode one of those until I decided I'd rather walk and flash passing drivers the peace sign.

One time though.. there was a substitute bus driver. My house was the first stop. My brother and his football buddies started whispering.

The bus pulls up in front of my house (which was in the country). EVERYONE got off the bus! You should have seen the bus driver's face.

My bus is much prettier than the one you have in the photo. I also don't stop when kids aren't at their bus stops, not a honk nothing, but a gold vision in the wind.

I have heard these days back when the teachers and school staff were okay to be with students. Some people are shocked now when they hear it happen, but I think it was more common on the past than most will ever know.

All I remember in HS was the GMC school bus with a manual transmission. The rear of he bus was popular for those who wanted to sneak a smoke. Although I think that driver smoked cigars when no students were on, I kind of remember the smell of vinyl seats infused with the aroma of a Phillies Blunt...

I loved this post, Curmy. I also rode the bus to high school.
In the 70s...
Maybe we weren't cool but look at the wonderful adults we are today. We're bloggers and everything.