Cicada update -- some crunching, not much buzzing... yet

It's been nearly three weeks since I told you the 17 year cicadas were about to come out -- and I hadn't mentioned it again because there's been nothing to report.

Oh, there's been some evidence of the cicadas' arrival: We've seen a few discarded shells... and a lot of very happy, satisfied birds... and cats. Some of the birds seem to waddle when they walk and have difficulty flying. And every stray cat in the neighborhood has gained a couple of pounds.

Clearly, this is one party where arriving early can be fatal. 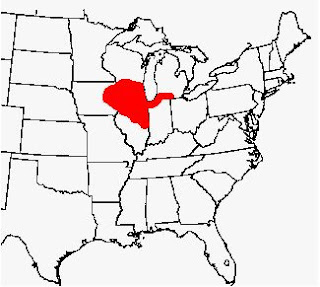 (At left is a map from the University of Michigan Museum of Zoology Periodical Cicada page. It shows the general areas in which the new 17 year brood is now emerging.)

The cicada situation had changed by yesterday, however. The entire neighborhood was out for the Memorial Day Parade that wends its way through the neighborhood streets, finishing up at the local high school. And a lot of the trees looked like they'd developed a sudden case of acne. A few trees seemed to be growing up out of newly tan soil as the nymphs have crawled their way to these trees, hoping to climb up and burst through their shells. The sidewalks displayed clear evidence that not all of the nymphs had made it to safety. And a distinctive crunching noise could be heard underfoot when walking over to inspect the bugs on the trees....

The five year old who lives two doors down told Long Suffering Spouse how he'd helped one bug out of his shell. (Memo to cicada population: Try to avoid emerging near houses with small boys.) Long Suffering Spouse told him that there are just some things a bug just needs to do for itself. The little boy took it well, I'm told.

But the fabled buzzing hasn't really started. I heard a couple of half-hearted buzzes yesterday afternoon... but it's warm outside today and the process may accelerate.

The linked site explains why: The critters emerge as nymphs, then crawl to a tree (or in a few cases, our garage) and then molt. They emerge as adults from this last molt -- but they are white in color, not black as in the picture above. The color changes as the skin hardens: It's only then that they start to sing. The site also has snippets of cicada calls available in a couple of different formats.

Those of you from out of town may wish to explore the linked site. I guess I'll just wait until ours are ready to sing live for us.
Posted by The Curmudgeon at 12:03 PM

It's not something I'm familiar with; thanks for the info.

these look like what we call katy-dids in podunk, but ours are green and we have then every year. they are so loud at night!!! they are just barely starting here now and will go until early fall.

so get yourself out to DuPage County and you will hear PLENTY of buzzing! It's deafening! This morning they were everywhere - including a bunch hanging off my car tires.....

You can use the cicada pics from my blog - but send some of your readers my way!!

It is great to hear about cicadas. I miss that event. And lightning bugs and june bugs--but I don't miss mosquitos. But then I don;t think anyone ever wrote about them in a sympathetic way.

We lived in Clinton, IA, my husband's home town, for eight years and the cicada's that normally are there are enough to drive you nuts in the summer. Between those, the shad flies and mosquitoes, one doesn't stand a chance of a good night's sleep. LOL

Yvonne -- Thanks for the use of the pictures; they'll be up this morning. Hope you get some new visitors from it.

i think we have them where i grew up. and yeah, as kids, i remember we used to torture them out of their skin when we were bored.