Hey Detroit! Is this for real?

Whatever happened to American innovation? 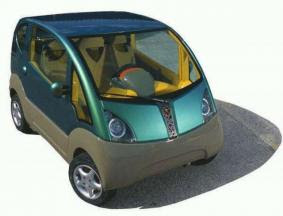 Here, supposedly, is a car that runs on compressed air -- about to go into production in India. The Indian car manufacturer is Tata Motors. The compressed air engine was developed by a French company called MDI. Here is what "gizmag" (where the first link above will take you if you click on it) has to say about the new vehicle:

Most importantly, it is incredibly cost-efficient to run – according to the designers, it costs less than one Euro per 100Km (about a tenth that of a petrol car). Its mileage is about double that of the most advanced electric car (200 to 300 km or 10 hours of driving), a factor which makes a perfect choice in cities where the 80% of motorists drive at less than 60Km. The car has a top speed of 68 mph.

Refilling the car will, once the market develops, take place at adapted petrol stations to administer compressed air. In two or three minutes, and at a cost of approximately 1.5 Euros, the car will be ready to go another 200-300 kilometres.

As a viable alternative, the car carries a small compressor which can be connected to the mains (220V or 380V) and refill the tank in 3-4 hours.

Due to the absence of combustion and, consequently, of residues, changing the oil (1 litre of vegetable oil) is necessary only every 50,000 Km.

Memo to Ford, GM and the incoming owners of Chrysler: When will your competing (and improved) versions of the compressed air car be announced?

I think American auto manufacturers can safely wait to announce their own entries into this market until... this afternoon! Please, Detroit, for the good of the country: Let's get going on this!

Thanks to RT for the link (in one of his patented 'Blog Drive-Bys') to Urban Iconoclast. That's where I found the "gizmag" link.

In the time I spent explaining the provenance of this post, I was hoping for a news alert from an American auto manufacturer about compressed air technology.... Still waiting....
Posted by The Curmudgeon at 9:29 AM

Email ThisBlogThis!Share to TwitterShare to FacebookShare to Pinterest
Labels: Questions

It's hardly a gas guzzler, is it?

Curmudgeon... you linked to the site and not to the post. Your ping won't appear there like that. If you edit and change it to the post URL, it should re-ping.

RT -- which do you prefer? As in which is better for you: A link to the post or to the site?

I'll send this link to my friend who enjoys writing about cars. Hope you are feeling well.

Pssst.. Ford in Flat Rock, Mi is on a two week shutdown.

Barb, I didn't know the name of the plant, but I figured as much from your blog. If only they were retooling for a non-gas burning car!

Interesting concept. I'm sure my gearhead husband will be commenting when he reads this!

I'm still waiting for the U.S. to mass produce ethanol based vehicles (like Brazil) and that hasn't happened. I don't think I'll hold my breath (compressed or otherwise) for this development.

I like the concept, especially after the $75 fill-up I made the other day. Ethanol vehicles would be nice, although most vehicles today can't do more than E-15 without corroding the fuel lines. Note that there is a $.54/gal excise tax on imported ethanol to protect ADM, etc...The Brasilians make their ethanol from sugar cane which is more efficient than making it from corn, which has to be made into sugar before it can be made into ethanol. Why should US consumers be denied the lower cost ethanol imports from Brasil?

Ralph, I had heard that Brazil's ethanol products were much more efficient than anything we've produced so far. It would make sense to import from Brazil. It makes me wonder why we don't.