Panic in Boston over publicity stunt: A follow up 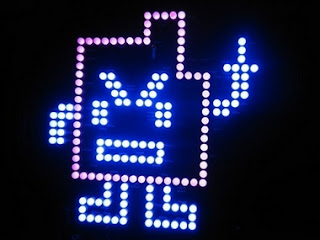 This is a picture of one of the "devices" that shut down Boston on January 31. Remember? Here's a picture of a Massachusetts state policeman removing one: 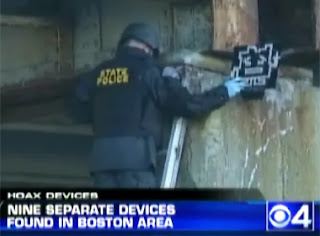 The story is in the news again because, according to an AP story by Denise Lavoie, posted late this morning on Yahoo! News, criminal charges were dropped today against Peter Berdovsky and Sean Stevens, the individuals who planted the Boston "devices."

That's Berdovsky on the left and Stevens on the right at their court appearance today.

Ms. Lavoie reports that prosecutors agreed to drop pending criminal charges against these men after they offered contrite apologies in court. In addition, Berdovsky performed 80 hours of community service and Stevens performed another 60.

"Devices" like that pictured at the top of this post were "planted" in Boston and nine other cities around the U.S., according to Lavoie's story, but only in Boston were bomb squads "deployed, and highways, bridges and some transit stations... temporarily closed" because of "fears of terrorism."

According to the Trivia page of the IMDb entry for the "Aqua Teen Hunger Force Colon Movie" (that being the epic that Messrs. Berdovsky and Stevens were endeavoring to promote), Turner Broadcasting, the parent company of Cartoon Network (on which the "Aqua Teen Hunger Force" cartoon is shown) and "Interference, Inc., the marketing company that created the campaign, reached a settlement with city and state officials to resolve" their own civil or criminal exposure. "The companies agreed to pay $1 million dollars to the Boston police department, and $1 million to fund homeland security. Jim Samples, the head of Cartoon Network, resigned his position as a result."

However, neither today's news story nor the IMDb entry reports the status of the charges that surely must have been brought against the public officials that were so dim as to confuse a lighted stick figure with a terrorist bomb.

I'll bet you can guess why.

And, if I'm wrong, please, please, please set me straight: Did anyone in Boston police or government circles lose so much as a day's pay for this unimaginable overreaction?
Posted by The Curmudgeon at 12:27 PM