AC or not AC, that is the seasonal dilemma... 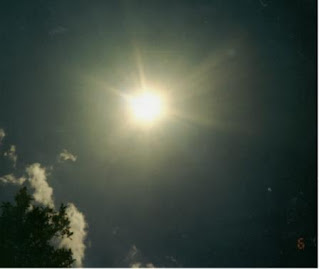 It's been warm in Chicago the past couple of days. The temperature has gotten up into the mid-80's at least, away from the Lake, and stayed there during daylight hours.

And there's actually been sunshine.

Not constant, of course -- this is Chicago -- but enough to make it warm in the Sun... and even warmer in a largely unshaded den that sits in a one story addition out behind the Curmudgeon's Northwest Side home.

Never mind that the den is the hardest room to heat in the Winter or cool in the Summer. Never mind that cool air from the air conditioning will be funnelled, if at all, into that room through an elaborate system of floor and table fans that Long Suffering Spouse will soon set up in the cooler, better ventilated regions of our home. From the kids' point of view, these are mere quibbles. The kids -- especially Oldest and Middle Sons -- want the AC on and they want it on yesterday. 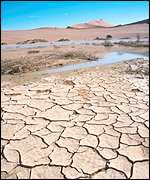 (This is not a picture of our backyard -- but you'd never know it the way the kids are talking.)

My youth was divided between two houses, one in the City and one in a distant region of Exurbia where Christ was rumored to have lost His shoes. Neither of these houses was equipped with air conditioning.

Somehow, however, despite this deprivation, I managed to survive to adulthood.

I moved to a place of my own -- one which I admittedly selected, at least in part, because it was air conditioned. My dwellings since have been similarly equipped.

I can't complain about not having AC growing up, but I think, maybe just a little, I'm still sort of peeved that my parents put AC in just as soon as I moved out. In fact, I think it was the very next afternoon. But I digress.

Air conditioning costs money to operate -- and this year will be particularly expensive because the electric company has raised its rates.

It raised its rates because its supplier is charging so much more. And the supplier? Well, the supplier is a sister company of the utility. But don't worry -- there was a competitive bidding process.

Anyway, aside from the cost, there's also the wimp factor: Even my pampered offspring ought to be able to handle one warm afternoon and night every now and again. Granted, when the 90º days start backing up, one after the other, I'll be the first to throw the switch and take my chances about paying the bill. But for just one or two 85º days?

If the den is too warm in which to watch ESPN for six hours at a stretch, couldn't the kids maybe go to another part of the house and, say, read a book?

I guess I really am a radical kook after all.
Posted by The Curmudgeon at 8:48 AM

Not a kook. Responsible. I have been having a similar dilemna. Stick with ceiling fans, which my assumption is cost less to operate or install my 2 5000 BTU AC units. So far I have opted for the fans, fearing the electric demons will send my bill before I can afford to pay it!

I have been using my ac since April, it's just too darn hot.

But I'd move everything from the den to another part of the house if it were me.

When I was a teenager there was a horrible serial killer problem in the LA area (I'm not going into names but it was in the mid-80's, you can probably find out who it is).

I remember we slept with all our windows closed and no AC and thought were were living in pioneer times or something.

I am a self-confessed a/c junkie! I mean even in the winter I have a window cracked open and a fan on.. how could I survive a summer without a/c??? This is just weird cuz I grew up in Florida and had no a/c for a very long time.

We already have the elaborate system of fans in place. :)

I think we need to get the Indian car company working on the AC problem.

I am going to stall as long as I possibly can before the annual installation of the window A/C units. Of course, if we get too many more days like today and what tomorrow is predicted to be, I may not be able to stall much longer.

Can someone please explain to me why it has to from too cold to too hot all at once? Whatever happened to moderate temperatures??

"But don't worry-- there was a competitive bidding process."
hahahahahaha - good one.

we have not turned the AC on yet in the room that houses 2 computers and the TV, but today might be the day...
I'm with Linda. Whatever happened to moderate spring temps in Ct.?

The youth of today dont know how lucky they are to have the choice. You could solve the unemployment problem and save the environment too by paying the kids to operate manual fans.

"My youth was divided between two houses, one in the City and one in a distant region of Exurbia where Christ was rumored to have lost His shoes. Neither of these houses was equipped with air conditioning.

Somehow, however, despite this deprivation, I managed to survive to adulthood..... I can't complain about not having AC growing up, but I think, maybe just a little, I'm still sort of peeved that my parents put AC in just as soon as I moved out. In fact, I think it was the very next afternoon. But I digress."


I laughed aloud when I read this!

When we lived in Clinto, Iowa for 8 years, it was the longest decade of my life. I was born here in WA state and we never had A/C all the time I was growing up. We don't have the humidity that IL has though. Still, I would have A/C now, no matter what if I still was in Iowa. We have even considered getting it here, but running it anywhere is so expensive, so we stick with our ceiling fans for now.

I am in Virginia but can relate to this post. I have trained my daughter to endure the windows open, ceiling fans on, and the heat. There are, however, those days when the humidity gets to me and the AC comes on. They are rare, but it can happen.

I grew up in AZ - it is a dry heat and we didn't have AC. My parents still do not.