Carved in Sand -- a must read for victims of CRS

I saw an article last evening on Yahoo! News, about a new study suggesting that hormone therapy may help ward off dementia in women -- if the therapy is started soon enough after menopause.

I skimmed the article with a slightly guilty shiver -- I'd read about this before. I'd read about it in a new book, Carved in Sand, by Cathryn Jakobson Ramin.

Careful readers may recall my mentioning this book in an earlier post. 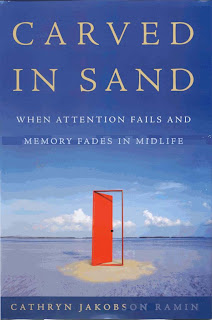 Full disclosure department: I received a copy of this book -- free, gratis and for nothing -- from a publicist who hoped I would be moved to do a review. No promises were made.

But consider this my review: Carved in Sand is an important book for those of you who -- like me -- are Baby Boomers. It's important if you're Generation X or Y or whatever we're into these days. It's really important to all of us who have brains and would like to keep them functional for as long as we're breathing.

Carved in Sand is a book about brain health. Ms. Ramin had a problem: A career journalist and life-long high achiever, she was becoming forgetful. Sometimes scarily so. And she could feel herself slowing down. When she reached out to friends and colleagues, she found she was definitely not alone.

Slowing down mentally may not even have been noticed -- much -- in happier days of yore -- but it's a real problem for those of us still trying to compete in the Internet-fueled, PDA'd, cell-phone-ringing, instant-messaging world of today. So Ramin decided to investigate what was happening to her and, in so doing, to make herself a guinea pig for all the current remedies and theories and report back to the rest of us... who are all suffering, to greater or lesser degrees, from CRS in middle age.

"CRS" is a term used among my peers: Depending on where you are when you explain it, it means Can't Remember Stuff. Or Can't Remember... well, you know. Ramin heard about this euphenism and many more in the course of her research.

Ramin's research is recounted in a series of "interventions" -- strategies she heard about, researched, and tried in attempting to "fix" her own memory problems. Hormone replacement was one of the "interventions" she explores in the course of Carved in Sand.

The good news: Ramin didn't have Alzheimer's -- but she reports about people she met along the way who did -- and what's in the pipeline for them in terms of treatment. She reports about traumatic brain injuries -- how seemingly minor events from childhood -- not just getting flattened on the gridiron -- can have consequences in later life.

As I read the book, realizing early on that I liked it well enough to attempt a review, I began dog-earing pages and underlining things that I might include in this little essay.

There are too many pages dog-eared. Looking at it this morning, to cite one example, everything from page 114 to 133 has been folded over -- except for page 121/122. Some of these pages deal with the brain injury sections -- I still have a son playing football, you know, and allegedly major consequences from seemingly minor traffic incidents are relevant to me as an attorney. The other pages in this particular dog-eared sequence concern Ramin's report of her experiences with "smart drugs" or "cognitive enhancers."

Two in particular are mentioned -- Adderall -- which Ramin loved initially... but began to fear as it seemed to 'disconnect' her from "ordinary human requirements." She found that she couldn't 'wander around aimlessly' in her own mind anymore: She was "on, all the time." The other was Provigil (modafinil) -- a drug labeled for the treatment of narcolepsy. Ramin experienced increased focus and productivity with this drug, too, but her memory test scores were only slightly improved from her drug-free baseline... as opposed to the dramatic improvement she'd experienced with Adderall.

But Carved in Sand is not just a book about pills. Meditation strategies -- even dancing -- are explored as methods of enhancing brain function. Undiagnosed physical ailments can depress brain function -- and drugs used for the treatment of chronic conditions can have unintended consequences on memory, focus and concentration. Your doctor may never tell you about these -- and he or she may not even know about them.

In fact, Carved in Sand is a book to give as a gift to your internist: It's a gift that could give back to you many times over. (Paging Doctor Anonymous: If our publicist friend is still lurking here, she could do worse than contact our old blog friend Dr. A.) In fact, now that I've read Carved in Sand I'm on the horns of a dilemma: I want to share this book with Long Suffering Spouse and with my own internist... but that might compromise my anonymous status. I'll continue to work on that....

Now I feel really smart for being on the pill all these years. I've been dementia free for some time now (minus that one little breakdown in 2005 that I'd prefer not to think about).

This sounds like an important book for all of us to check out.
The idea of losing memory frightens me more than losing physical ability.

Plenty interesting.. thanks for sharing the book stuff.

I now know what it is that ails me - CRS.

I no longer suffer from CRS but have moved on to the more advanced form, CRAFT (I'll let you figure out the acronym!). Recently I have been becoming a bit dismayed that I seem to be losing grasp of what I used to think was a fine memory and it seems that a little more of it is chipped away each day. In the middle of a sentence I'll stop and try to remember what it was that I was going to say or I can't put names to faces that I should easily remember; I won't remember why I walked into a room; and to try to remember a certain item at the grocery store is downright impossible.

In talking to my hematologist last week during a check of my iron levels, she suggested that perhaps I should speak to my GYN about progesterone as I apparently have all the symptoms of someone in need of some hormone replacement therapy.

Oh goody. I knew this time would eventually come but I'm still not what one would call prepared for it. I am especially not prepared to lose my mind which is what I seem to be doing at an alarming rate. Funny thing is, I never knew that memory loss was part of menopause but at least now I know what the culprit is and it's not necessarily an early form of Alzheimer's. I hope!

I may have to read this book as it sounds like it has some good advice, if I can remember!

Interesting. HRT is not for those who have a family history of cancer on the female side. You mentioned that dancing was a brain and memory improver - - seems when I did Jazzercise on a regular basis I felt a little more cognitive and focused. I have been off Jazz for 6 months - I will go back and see if there is an improvement - my own experiment - keep the drugs...

Thanks for the book review. It looks like my book collection is going to grow by one after I go to the bookstore today.

Great post & review! tho you scared me at the end there; i too have a son playing football. Last year at age 12 he was out all season because of an injury - just broke his wrist. Think you might like this weeks Joke Friday as it pertains to this post. Finally got around to adding you to blogrolling. was going to take it down as it doesn't seem to work/ doesn't update. anyway happy weekend.