A bill collection story... with a twist 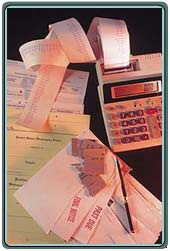 But today I have a new one. Honest.

Every month West Publishing (or Thomson West as they're calling themselves these days) sends me two bills, one for legal research (Westlaw) and another for a web site that supposedly drives business to me (Findlaw). I have no use for the web site -- I only wanted it so people looking for me specifically could find me during the transition from the old to new Undisclosed Locations -- but Westlaw is useful. And expensive. These two bills add up, every month, to more than what I pay in rent.

(Aside to Shelby and any other law students who come by from time to time: You get to use Westlaw free while you're in school. It's like drug pushers giving away samples on the school playground: They count on you to become addicted. And when you're out of school -- wham! -- they can charge you pretty near whatever they want. And they do. And, what's worse, you almost can't practice without Westlaw access in your field.)

It's no secret that things have been slow around here: When I work, I sometimes don't make money. But when I don't work I definitely don't earn money... and I've lost considerable time from work because of my health this year. So the fact is I fell behind on my payments to West -- a couple of months behind, in fact, before I sent in the February and March payments during April.

It's May 11 now and the April payments (due at the end of April, you understand) haven't yet been sent. They're late... not very late... but late.

But West must be getting nervous about me: Yesterday I received a dunning notice on the fax.

It mentioned the overdue April Findlaw and Westlaw payments, as you might expect.

It also mentioned the May payments... which aren't yet due.

In fact, I just got the May Westlaw bill today.

That's right: I got a collection notice about a bill that was not only not late, it was not yet received.
Posted by The Curmudgeon at 1:30 PM

ouch. is that kinda like them making assurances of no repudiation? stinks nonetheless.

Look at Loislaw.com. Much, much cheaper than Westlaw. Not as full functioned, if that is a word; but, if you get used to it, it works as well.

My thoughts on Findlaw and MH, not worth the money.

Well, Cur, as someone who has been in and out of school for nearly forever, could you cut down your bill by becoming a student?

Matter of fact my first job here in Scotland was as a quasi-student. Maybe it's silly, but I am always thinking out of the box.

well as claire would say "crikey"!!

We're being ruined by people consumed by money (and I don't mean you - I mean a company that would send a collection notice about a bill that hasn't been received). Don't get me started on Citicard and their wily practices. Suffice it to say, I hate Citicard.