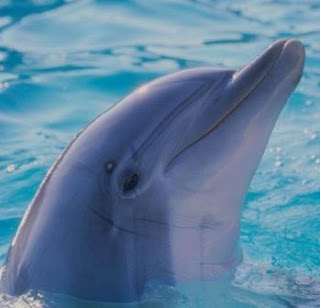 An AFP story posted this afternoon on Yahoo! News caught my eye with the headline, "Irish dolphins could have their own brogue: scientists."

Apparently scientists do say so, according to research conducted by the Shannon Dolphin and Wildlife Foundation, which "has been studying a group of up to 120 bottle-nose dolphins in the River Shannon using vocalisations collected on a computer in a cow shed near Carrigaholt, County Clare."

Only in a story about Ireland would we learn that the computer was kept in a cow shed. I'm lapsing into St. Patrick's Day mode just reading over that sentence. You are fortunate indeed that I've never had either the inclination or ability to make an audio post.

No word yet on whether German dolphins, if any exist, would swim only in straight lines and always in single file order.
Posted by The Curmudgeon at 3:13 PM

oh that is just to darn funny....yes I can hear the accent now.....and yes yes it's coming from the barn....dear god mary and joseph!

Does this mean that there are Japanese dolphins, too? And exactly how did these dolphins learn to speak with a brogue? Faith and begora what's next?

what if the dolphin had a lisp?

Doesn't anyone feel sorry for the poor dispalced cows in this story? As cattle wrangler and cow advocate, I feel I have to stand up for my bovine brothers and sisters.

I can't imagine a dolphin saying "Top of the morning."

I, for one, am thinking that the audio post is in order.

Heee... computer in a cow shed and German dolphins in single file! I'll be sniggering uncontrollably for the next day or so!

LOL! German dolphins and straight lines - what a riot - of course they would! You make me laugh thanks!

Are Irish dolphins of the Red or of the Green?