Calm before the Crosstown Classic storm

A hush is settling over Chicago as Friday afternoon begins. In just about an hour, the Cubs will jog out to their positions at venerable Wrigley Field and the White Sox will step to the plate.

It's the Crosstown Classic, Game 1 of 6. Three at Wrigley this weekend. Three more at the Shrine on 35th Street June 22-24.

There are no neutrals in these games. Let out-of-towners believe what they want: You can't be a fan of both ballclubs in Chicago.

We may have been united last night, hoping the Bulls might beat the Pistons. And we'll be united again when the Bears are playing and the Cubs and Sox aren't. And most of us who were friends yesterday will be friends again on Monday.

What will be the memorable image from this year's series? 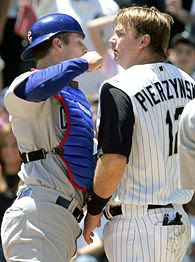 Last year, Cub catcher Michael Barrett clobbered Sox catcher and enfant terrible A.J. Pierzynski after Pierzynski scored a run, running through Barrett in the process. Barrett had a good reputation prior to this incident... but A.J. can get under almost anyone's skin.

As Sox manager Ozzie Guillen said about Pierzynski: If he's on the other team, you really hate him... if he's on your own team, you hate him a little less.

Oh, it's going to be a fun weekend in Chicago. Go Sox.
Posted by The Curmudgeon at 12:14 PM

this is sports, right curmy?

Hey did you change comments to responses?

Enjoy your baseball filled weekend along with the rest of Chicago. And you do realize that it's because of things like this Boston only has one team, right??

Just curious.. if say me & Mike were headed Chicago way Sunday night or Monday on 94, how hard would it be to find you? :)