The boy and his father rode together up the dorm elevator. The boy was moving in for the semester; his father was lending a hand. They were not alone; another young man got off at a lower floor.

The boy regarded his father with surprise. He'd always seen his father as the straightest of straight arrows. How could he possibly know what marijuana smelled like?

He eventually found the courage to ask.

The father harrumphed again. "You kids today think you invented everything. If you haven't done it, it's never been done before.

"People smoked marijuana when I was a kid, too, you know. Especially musicians. Gene Krupa went to jail for possession of marijuana in 1943. It nearly ruined his career" --

Oh. You thought I was the father in that story? Sorry. I was the son.

Gene Krupa was a drummer and bandleader in the Big Band Era. He had the drum solo on "Sing Sing Sing" at the 1938 Benny Goodman concert at Carnegie Hall that seemed to go on... and on... forever. I listened to the concert recording a lot as a kid.

(And that record was made an entire generation before In-A-Gadda-Da-Vida.)

So my father was right: Our generation hadn't invented anything new. The Baby Boomers may have expanded the covert pharmacopoeia a bit, but that's all. Louis Armstrong had smoked pot. Bing Crosby smoked pot.

(Kids in the 1970's didn't think of Louis Armstrong or der Bingle as particularly cool. These were artists our parents enjoyed... and so, by association, they were necessarily uncool. A lot of us grew out of this.) 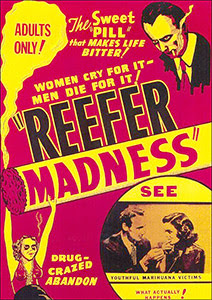 And if we had thought about it at all, we might have realized that old movies that we laughed at in late night campus showings, like "Reefer Madness", were made because kids were smoking marijuana even way back when.

I've written before about my very limited experience with marijuana: Essentially, I had no use for it. For me it was a logical proposition: Getting caught with dope could get me into serious trouble -- even then -- but drinking beer, awful as it tastes, was entirely legal. (The drinking age was then 19 in Illinois. And even that was winked at. Then.)

I wonder, though, if this incident with my father might not also have colored my attitude toward dope: Pretty hard to be cool and rebellious merely by aping your father now, isn't it?

We put our kids through all sorts of anti-drug indoctrination today: D.A.R.E. programs and Red Ribbon Weeks and so on. And the kids look at almost any movie or TV show from the late 60's or 70's and conclude that either we're all a bunch of lying hypocrites or that we (their parents) were really the hopelessly dorky kids who never heard of the stuff -- leaving them free, in their imagination, to discover drugs for themselves.

Well, I haven't been that easy on my kids: I haven't sugar-coated my own exposure to drugs. I haven't denied that I drank in college. I won't be a hypocrite (although I do reserve the right to keep some details to myself -- at least until they've safely navigated the shoals of adolescence and post-adolescence).

I've told my kids the have rules changed since I was their age -- the rules are harsher now. The consequences are more onerous. In Illinois, for example, there's a zero tolerance statute for underage drinking and driving: A driver under 21 who is stopped for any traffic offense while driving with any liquor in the driver's system -- even less than the .08 legal limit for adults -- will lose his or her driver's license. There aren't many loopholes. See, 625 ILCS 5/11-501.8.

I tell my kids I didn't make up these rules. Nor can I do anything about the new, harsh rules: They'd better just follow the rules.

Besides: Clamping down on drinking and driving makes sense. Some of us drank and drove... but we got lucky. But this isn't what persuades the kids. So I keep this mostly to myself.
Posted by The Curmudgeon at 11:40 AM

Marijuana used to be accepted also as a pharmaceutical agent. Plus ca change, plus ca meme. I am glad you were tough and straight with your kids about dope. I have seen way too much grief come from the use of it. I remember a young student trying to be rebellious by picking the topic of legalizing marijuana. "Too broad for a 20-page paper" I said not at all phased by her topic choice. She launched into a tirade about my repressing her or some such rather than learning anything about rhetoric.

Very important post. My dear loved one let himself be a victim to these pitfalls. It's so very imortant to be aware of the dangers. He was not lucky.

Glad tho, that no one else was hurt - and that he was alone in the car. They would not have been lucky either.

Glad too that if any good can come of it - then ok. Ball clubs taking beer out of the club houses is a good start if it saves just one life.

This is one of those subjects that hits so close to home and continues to weigh so heavy.

A good ole Hemp......hmmmm.....yes and now we can make jewlwery out of the stuff and wear it....soap and bath products have it in it..and all sold totally legally....it is now a perscription drug and you can grow it leagally for medicinal purposes where I live.....so explain that to your kids when you walk by and smell the "weed".....great post as always....

No wonder Bing Crosby always seemed so mellow as compared to Bob Hope!

When my daugher was about 5 or 6, I talked to her (age appropriately) about drugs. How did this come up? Because on the walls in a Tennessee restaurant were pictures of Elvis and he was sooo gorgeous she wanted to know all about him. SHe asked him how he died. That was my 'in.' I thought, start now, and keep at it... Considering she's ten and knows more than I think she should, I'm glad I did!

my husband and I try not to be hypocrites about drinking and drugs with our teen-agers. I told them how sick they can feel with a bad hangover and it didn't appeal to them.

so far neither of them likes the taste of wine or beer..

I was a child of the '70's and most everything that encompasses.

I was watching VH1 a few nights ago and they were doing a rundown on the greatest One Hit Wonders. Iron Maiden was in the top ten, if I recall. They said it was supposed to be In A Garden Of Eden, but the singer slurred it so badly they went with what he sounded like he was saying. :)

I dread the whole "Well, when I was your age..."-trying-to-convince-my-
kid-that-he-isn't-as-original-as-he-
thinks-he-is talk. Plus, my mother keeps reminding me that all the crap I pulled is bound to catch up with me. Any chance I could just send him your way in about 10, 11 years?