Why is Curmudgeon driving us buggy? More cicada stuff....

Yvonne from Uniquely Me commented on yesterday's cicada post; she said the buzzing was well underway in DuPage County, Illinois where she lives.

DuPage is west of Chicago and warms a little sooner; Lake Michigan serves to moderate both hot and cold temperature extremes nearer its shore. Because DuPage is just that much warmer in the Spring, the cicada brood got a head start there.

Yvonne was kind enough to let me share some of her pictures of the bugs with you: 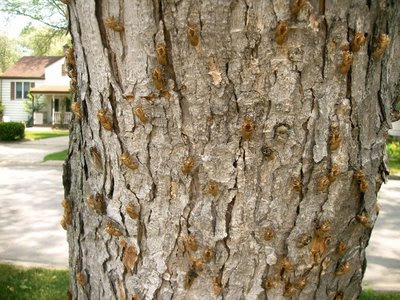 When I said it looked like some of the trees in my neighborhood had developed acne overnight, this is what I was talking about. 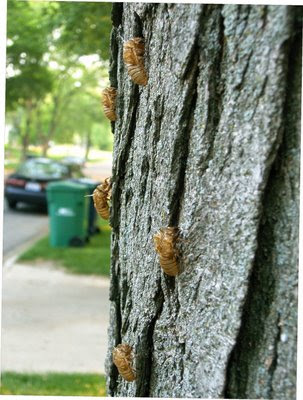 These are the cicada nymphs climbing up.

Here's one in its final molt (although this looks darker in the picture than those that I've seen here -- the ones I've seen look almost white on emerging from the shell -- but they'll turn dark as well as the skin hardens): 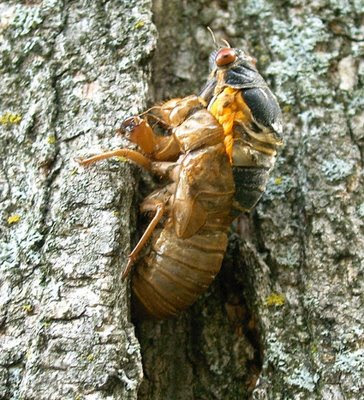 (And fortunately for this guy, no five year old tried to 'help' it out of its shell....)

And when I said it looked like the bases of some trees had changed color, this is what I was talking about: 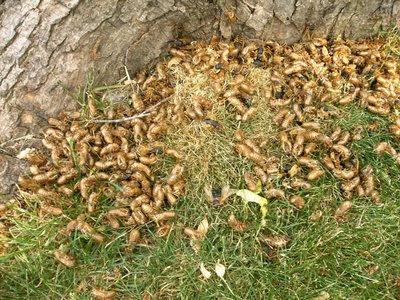 It's interesting that these were all taken last Thursday or Friday. We weren't at this stage until Monday, and we're only a little ways away.

And, if you visit Yvonne, and read her post that accompanied the pictures I've reprinted here, you'll see that she was -- at that time -- a little disappointed with the cicada turnout. However, judging by her post this morning (and the new pictures she's posted), it appears that the turnout has increased. Stop by Yvonne's today and say hello and tell her the Curmudgeon sent you: My guess is that she'll be inside anyway... and maybe on her computer.

And for those who've noted that they have cicadas in their part of the world each and every year -- well, so do we. Those critters tend to come out later in the Summer; those cicada buzzings warn us that the lazy Summer days are almost gone. All these 17 year cicadas will be long gone by then.

In the meantime, watch where you step!
Posted by The Curmudgeon at 7:13 AM

I must admit I haven't seen anything like this before.

Those cicadas are grossing me out!

This is the part about growing up in Appalachia that I don't miss: the bugs. (You mean, there are parts I do miss?) California has no bugs. And exactly five mosquitoes.

California has no bugs. And exactly five mosquitoes.

Not where I live. We had to have mass spraying for West Nile virus here due to all the mosquitoes.

Anyway, the cicadas gross me out. One got into the house once (I know I'm a baby) but I didn't know what it was and it freaked me out. Blech.

These freakishly large bugs scare the beegeebies out of me! When I was a little girl I would pull the shells off the tree trunks and scare prissy classmates, my little sister and yes, even my poor sweet mother. Ah those were the good ole days :-)

Okay, this is just gross - really, really gross. I am NOT a bug fanatic!

And I thought I was all creepy crawly before. You just had to go and up the itch factor, didn't ya?!

My daughter who lives in Chicago proper has not seen/heard anything yet.