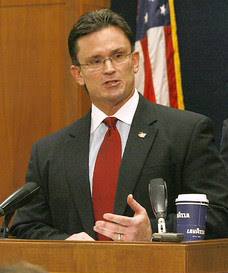 This is J.P. "Jody" Weis, late of the Philadelphia office of the Federal Bureau of Investigation, newly appointed as Chicago's police superintendent.

According to a story in this morning's Chicago Sun-Times, Weis will command a salary of $310,000 -- big money indeed for a public employee (and made possible, according to the linked article, only by appointing him to the positions of both police chief and homeland security chief).

Over three hundred grand for a public employee? That's almost football coach money. In fact, I bet there isn't a public employee in the entire country who gets more than $310,000 from the public trough other than football or basketball coaches at State universities. (If anyone knows different... leave a comment.)

Football coach money for a cop. Kind of makes you wonder... did he get a shoe contract and a weekly TV show deal too? And what brand of shoes? Nike, Converse and Adidas have the jock market tied up... what sort of shoe company would enter into an endorsement deal with a cop?

Boy, who'd a thunk being a cop would pay that well?

Stop by my blog and pick up the award I have waiting for you there.

Heads of the various lottery agencies/commissions/boards. We just had an article in the local rag that the head of the Georgia Lottery will make over $500K this year.

I would hope that Dubya makes more than the Top Cop in Chicago but I don't think it's much more than that.

As for what shoe company a cop could endorse for how about Bates? I've always owned Bates Enforcers for boots and my other uniform shoes!

And a big congrats on your award from Jeni, well deserved!!

at that salary I'd guess he got the Gucci shoe contract....

Still, $300K is a boatload for that job. Maybe I should do what that guy does. Or not.

OK, maybe I'm out of touch but maybe we should pay civil servants more than minimal wages. If we think that civic order is important andwe want someone who will work very hard and very well, then why not compensate them well? Personally, I'd rather see footballers getting less but then I am just too perverse, I guess.