Looking back? Why? (And looking ahead is scary,too) 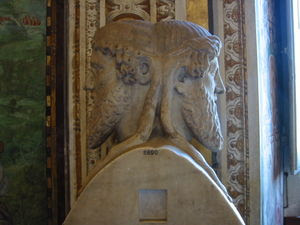 This is Janus, the Roman god of beginnings and endings -- the deity who survives in the name we give the first month of each new year, January. (And, Wikipedia tells us, Janus, as the caretaker god of doors and halls, survives also in the word 'janitor.' Who knew?)

"What would you like to do tomorrow?" Long Suffering Spouse asked me. We were alone. We had retired for the evening. Middle Son was still out. Younger Daughter and Youngest Son were still awake as well, doing whatever it is that teenagers do when their parents are not present. (I like to think they secretly read books. Wouldn't that be nice?)

"Nothing in particular. Maybe we'll put on a Fred and Ginger movie." If Bing Crosby is the 20th Century image of Christmas, Fred Astaire and Ginger Rogers are the dual spirits of New Year's Eve. In my opinion.

Long Suffering Spouse was unhappy with my answer. We're both happy to see 2007 out -- for many, many reasons. But I see no point in celebrating it. I don't want noisemakers or champagne. I don't look forward to being awakened by the phone ringing at midnight as Older Daughter and Abuela check in. (And, yes, I probably will be asleep.)

Nor am I looking forward to next year. Why should I? Changes will come; they always do. But they won't occur because the page turns on the calendar; changes will come, for good or ill, in their own time and for their own reasons. Wednesday will be very much like today -- a second Monday in the same week, in fact -- except that, on Wednesday, the public holiday decorations will be taken down.

There are reasons to be hopeful; if there weren't we couldn't go on. But New Year's Day doesn't make me hopeful and it doesn't make me happy. It just reminds me that time is passing... and I must face the reality that there's less and less time to do the things I'd hoped to do... or dreamed of doing....

No. Look too far ahead and you'll see only the waterfall. I'm in the rapids now, and I must concentrate on where I am right now and on what I need to do right here lest I be swept over the falls prematurely.

Interesting, very interesting choice of words there - "in the rapids, heading for the waterfall." I never would have thought of that but now that you mention it, I think I'm in a lull at the moment, hopefully just heading for the next set of rapids and that it isn't the waterfall I hear directly ahead of me.
Peace. Hope 2008 pans out a little better in the way of maneuvering the rapids.

An interesting fact about janitors there.

Have a super New Year!

i like to think of the 1st as a brand new beginning, kind of like the first day of school with a brand new notebook waiting to be written in. (i KNOW! a preposition is something you do not end a sentence with! got it.) anyway, happy new year curmy, my friend.

I'm certainly looking forward to changes and challenges in 2008, getting out of my comfort zone.
Happy New Year to you.

"There are reasons to be hopeful; if there weren't we couldn't go on."

And yes. I agree and understand.

Happy New Year to you, the LSS and your children.

Great Post! I wish that I could write as well as you do. Perhaps, if I didn't abuse alcohol, I could.

I'm one of those idiots that say "this new year will be better than last".

I've always been a dreamer!

Well, you just sounded very curmudgeonly that's all, and that's ok. i can relate. New Year's not one of my favs either ( the looking back with regrets and the looking forward with apprehension). But we have another year to make it all right or at least try. Happy, Healthy New Year!!

This reminds me of the paraphrased Astaire song title: You're not stepping out with your baby??? Ah, but Fred and Ginger at dance, they make it seem so effortless. The movie is the better option than going out...

We are staying at home and making chili nachos. That's it, and we grown-ups anyway will probably be asleep prior to midnight. Not the kids, but New Year's Eve is for the young(er)..

Can't be funny all the time, that's what I tell myself.

As to rapids and waterfalls: paddle or row as the case may be.

It's good to be serious once in a while (altho I think humor is very serious business wearing an outrageous hat). I think more people are pesnive at new Years than are festive. I think looking forward and looking back is a good way to start a new year. Of course there will be things to give us hope and cheer in the new year just as there were things this year that cheered us an annoyed us and all the emotions in between.

Poor Curmudgeon....You don't realize that being in the rapids is a wonderful place ... watching the waterfall, but enjoying the swirl of life all about you? Later on, when you are idling in a shallow eddy and hoping you get to rest there a moment longer, but fearful lest the waterfall claim its due... you will look back upon the rapids with much fondness. Never let a rough patch in the river cause you to become landlocked. Swim and enjoy!

Curmy, don't be concerned about being funnier.
Just continue to be your old curmudgeonly self. I resolve to visit you regularly...I do enjoy your blog.
I for one am so glad this year is over; I am hoping for a great 2008.

Happy New Year to you, LSS and your whole family ~

Glad it's not just me who feels this way about New Year.

Just go where the current takes you, worked for me so far ;-)