It's my Blogiversary -- and, look, I got presents 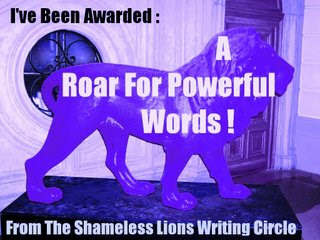 This award comes from both Jeni and Hilda. I am very pleased that both of you thought to send this my way.

Looking into this a little, I see that Jeni got the award from Linda, another frequent visitor here. And, if you would like more information about the "Shameless Lions," you should click here.

Now, however, I'm going to be a big party-pooper and not send this along to five more blogs -- although there are many deserving in the Sidebar, believe me.

Instead, I'm going to get just a tad introspective, because, well, sometimes that just happens on anniversaries, even silly ones like "Blogiversaries."

My Blogger profile says I adopted the nom de plume Curmudgeon in January 2005. I did it because it appeared to be the only way I could comment on Older Daughter's blog. Older Daughter had gone to Europe for a semester, during her junior year of college, and had started a blog as a way of communicating with everyone back home.

Then her computer acted up and her internet connection turned out to be not so well connected. In the meantime, I'd started my own blog. I don't remember what it was called. No one read it -- except Older Daughter, on occasion, because she knew about it and was embarrassed by even anonymous references to her. Because she knew it was me making those references. I deleted that first blog before starting this one.

I'm sort of sorry I did that, now.

I'd like to see some of those first posts again.

Then I started up this Second Effort (the name thereby explained) two years ago today. Why? For one reason, I'd become more and more Internet conscious -- I had just signed up for a second professional website that wound up giving me a couple of useless phone calls a month and cost me about $2,400 per year. (I finally discontinued it within the past couple of months.)

But I wanted that site then because I was moving my office and I was afraid that people -- prospective clients (i.e., other attorneys who might hire me) -- would not be able to find me when my address and phone number changed.

I'd had a good year in 2005 -- I went to trial on a case I'd been handling since 1996. Unfortunately, because I was almost exclusively devoted to that case for some considerable time before the trial, I wasn't building other business. And the carrier who'd sent that case to me was no longer writing business. I had finally settled the last part of my one substantial personal injury case -- but I couldn't cash the settlement check. So I was worried -- worried about the uncertainties ordinarily attendant to moving and worried, too, about how to replace a consistent source of income.

Well I moved, but I didn't replace the income in 2006. I didn't have a bad year on paper -- in part because I couldn't cash the check from the settlement of that PI case until well into January... and even then there was a major problem. Oh, I blogged about that.

I did have a couple of good hourly cases in 2006 -- one shot deals -- but, would you believe I have already billed more billable hours in 2007 (billable as in I have reasonable expectations of being compensated for that time at some point) than I did in all of 2006? And I had cancer this year. My total income for this year will lag behind my wife's -- and she teaches in a Catholic grammar school.

The uptick in hourly work is a recent phenomenon, a (very, very welcome) development during the course of my recuperation. It portends well for next year. I hope.

Through it all, I've been blogging -- blogging to try and preserve my version of the family history (anonymously, so as not to embarrass anyone in my family), blogging to make smart-aleck observations about the news, blogging just to try and be funny. To hone my chops as someone who can write funny stuff, and not just dry and serious legalese. Sometimes I get up on my soapbox and holler. And, also, I blog for company.

I work alone. And I miss my former Undisclosed Location where there were 20 or 25 people milling about on a common floor. Four of us moved here when the firm we were renting from decided it wanted to get out of the subleasing business. But that was too small a group. And one of our group died five months after we moved.

Anyway, blogging has also provided a world-wide water cooler for me, where I can swap lies and truths and jokes and shaggy dog stories with people of all walks of life and backgrounds. That's been a great comfort for me, too, even if sometimes I spend too much time at the water cooler and not enough time with my nose to the grindstone.

Nor have I been holding up my end of the bargain, lately. My return visits have, in many cases, slowed dramatically -- no longer once a day, or even once a week. I can only apologize.

It's not just that I'm working more. I have a new project -- a blogging project, actually -- where I'm putting to use some of the great advice I've absorbed in these past two years. I won't say more than that. But the project may be working. There weren't 400 visitors to that other blog two months ago... there's over 4,000 now and the numbers may (should?) really go up soon. That will absorb most of my blogging time, particularly in the next 60 days.

But it's not as much fun as this blog has been for me. And it won't be, even if it takes off as I hope it may.

That's why I wish this blog were on the cusp of a great growth spurt. But it isn't. In two years it's gone from zero to something. And there are people who stop by regularly, or semi-regularly, and seem to enjoy what I'm doing here. And I'm happy about that.

So, it's me who should say Happy Blogiversary to all of you.

Thanks.
Posted by The Curmudgeon at 8:54 AM

I'd like to read your "other" effort....would you email it to me?

Congratulations. Your quantity may have lagged; but, in my opinion, your quality remains top rate.

You're always one of my favorite reads, happy blogiversary.

I think that blogiversaries, just like birthdays, are excellent times for reflection and you reflected very well. I often wondered why this blog was titled "Second Effort" and now I know! It really is too bad you didn't keep your first effort but hopefully you'll keep this effort even when your third effort has taken over the blogosphere!

Curmy blogworld wouldn't be the same without you here. I am way worse than you in the comment department I live in feed world now.

I loved getting a bit more insight into your life and felt a bit sad that you have to work on own.

Happy Blogversary. Don't forgot about us. I'd be lost without my favorite Curmudgeon.

Curmy, congrats on a wonderful blogiversary. It is nice to read your writings, and I do enjoy your take on many subject, including the dynamic city of Chicago. And is cool that you like the White Sox, because the AL is the superior league...

Truthfully, I admire the quality of your blog, the smart writing, the wit, all things I say that my blog will have one day (i'm a lazy blogger).

I'm curious about your other effort...

Isn't it interesting that something as transient as electrons in a non-place was able to provide company, continuity, a kind of anchor when other things in your life were in upheaval?

I'd be interested in your other effort if you choose to share a name or a link with me.

I just celebrated a birthday and aws you know I am back in my mother country, two facts that make me also introspective. I began blogging for many of the sme reasons that you did--companionship, contintuity, honing skills (and for me, discipline) as a writer. I have been at it for more than a year now which surprised me as well as the companions I have met. Thanks and happy anniversary.

Thanks for explaining 'Second Effort'.

I'm a bit of a newbie to your blog followers but from the first read, I was hooked. I love the way you put your stories, commentary on your life, society, et al, out here in such a well-ordered, very well-written piece. Sometimes it is dead-on serious and othertimes, downright hysterical but always, always done just right. You gonna share the other site with this bunch of readers, maybe eventually, but hopefully sooner than later? Hope so, cause I really enjoy reading your stuff. I too find a lot of communication that is often very missing in my real life within the blogosphere and have met many, many fantastic people in doing so.

And one of our group died five months after we moved.

This is proof of your ability to write humor and why I keep coming back. Plus, even though we've never actually met, I consider us good friends.

Your blog helps keep me sane.

Your second effort has been a God send to me for a year now.

Happy blogiversary! I have enjoyed following your journey. Not sure if you saw the return comment I left on my blog, but I wanted to say that your pragmatic approach to surgery and convalescence has been an inspiration. In fact, before I left for the hospital, I went back and read several of your old posts.

Wow -- 19 responses and only one of them spam! I should have Blogiversaries more often....

Several of you expressed interest in my other blog, the one that's in my real name and is dry as toast and of local interest only.

Of course, I wondered why anyone would want to look at the other blog when I tell you it's dry as toast and of local interest only... and then I realize you've read this one.....

So why should dry as toast/ local interest only draw more hits per day than this blog? Simple: I mention names. Everyone who's ever worked for a small town paper knows that rule no. 1 is to name as many of your subscribers and potential subscribers as possible in each and every issue. And, in blogging, I've learned, single subject blogs do better than omnibus blogs.

But "omnibus blog" sounds much more high class, doesn't it?

And, besides, sharing my other blog, written under my real name, would kind of undermine the whole anonymity thing, right?

But thanks for your interest. I'm sure I'll return to the topic again.

In the meantime... here comes the omnibus....

Belated bloganniversary wishes to you Curmudgeon, you certainly have lots of fans, you are a voice of reason, I enjoy hearing about your work and family and the miscellanies of life.