Chicago gets ready for the Holidays 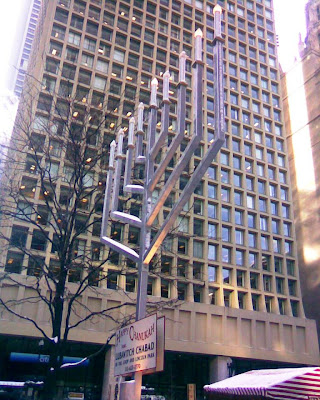 Hanukkah started this week. Here's the giant Menorah in the Daley Center Plaza erected for the holiday. 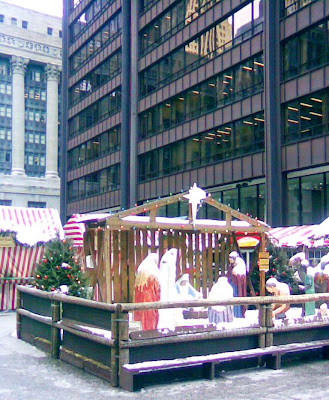 For devout Christians, the Daley Center Plaza also has a giant Nativity Scene.

As you may have heard, the city of Chicago is taking no chances with the Baby Jesus in the Nativity scene at Daley Plaza. He's been stolen in the past, but now there's a cable wrapped around his waist and bolted to the floor.

Somebody jokingly suggested wiring Baby Jesus with an electric shock. That would have been so great. Some hooligan grabs Baby Jesus -- and gets tasered to the ground. The city could have added a James Earl Jones/Godlike voice recording booming out, "DON'T TOUCH MY SON, NON-BELIEVER!!!"

If only such a moment could be captured on video... it would be a sure-fire hit on You Tube. 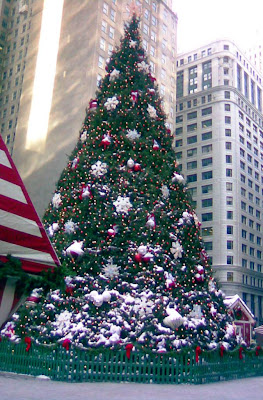 And it wouldn't be Christmas without a giant Christmas tree, would it? This is on the other end of the Daley Center Plaza, near the corner of Clark and Washington Streets. (Actually, these are a number of trees bundled together to look like one giant tree.)

Santa's house on the lower right, behind the tree. Santa wasn't in this morning when I came out of the courthouse. 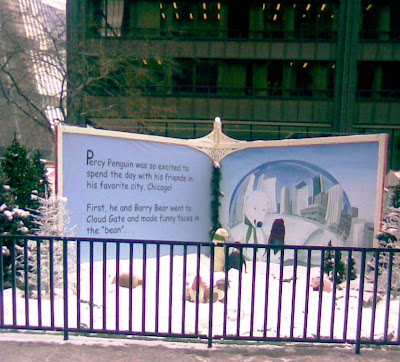 There's no water now -- it was less than 10° F here in Chicago this morning -- but even if we can't dye the water a funky color, we can still celebrate corporate sponsorship... but I didn't photograph that panel.

The Christkindlmarket opens up around lunch time and stays open until 8:00 p.m. These striped booths you see in this picture (which I didn't take) are partially visible in some of the other shots here. But all the booths are pushed together for security after closing. Maybe I'll get some of my own shots there tonight on my way to the Subway.

They wouldn't have something like that in Britain because they would not want to offend minorities.

two years and 600 posts...that is a GREAT effort....I enjoy reading your site very much.

They wouldn't do that in Britain>

bugger. I remember one Christmas walking around London being all giddy because they actually SOLD chestnuts that were roasted over open fires!!!! (Okay, garbage cans but hey)

Our snow all melted but our lights in downtown are very very perty.

These pictures make me feel home sick. There are days when I really miss Chicago. I think I need to go back and look at the picture that you posted of the Kennedy during the morning rush. That will snap me back to reality:-)

Thank you for sharing...it is nice to see the city my sister calls home.
Congrats on your anniversary.