This week, Barb, the scientific genius behind Heads or Tails, the revolutionary breakthrough in weekly meme technology, gives us a choice. We can write (heads) about something in the sky or space or (tails) about something underwater. Since we haven't seen the sky here in Chicago for sometime now, I'm feeling nostalgic. Therefore I choose "heads."

(Unless otherwise indicated, these pictures are all obtained from "How Stuff Works" -- for individual photo credits, see that site and follow the links -- and don't blame them for the captions here.)

We'll start our tour of the Solar System with the Sun. 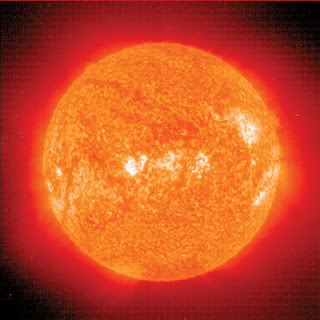 The Sun is a big ball of gas that gives off light and heat everywhere in the Solar System except, lately, in the Midwest. 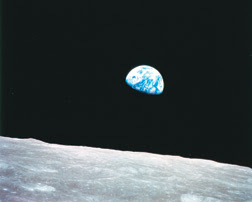 That blue object in the background here is the Planet Earth. Scientists are divided as to whether intelligent life may exist there. Although many of the conditions for intelligent life as we know it seem to be available on this planet, it also has Paris Hilton.

This is an illustration of how a solar flare can impact the Earth's magnetic field. Charged particles from solar eruptions can disrupt cell phone service, particularly if they scramble your brains and make you forget to pay your bill.

This is Uranus -- and if you just responded by saying "no, it's not," consider yourself on report. Uranus is the third largest planet in the Solar System. Oddly enough, Uranus was not known to the Ancient Greeks -- wipe that smirk off your face immediately! -- but is the only planet that every single modern school child is guaranteed to remember on the quiz.

Can we get another slide here? 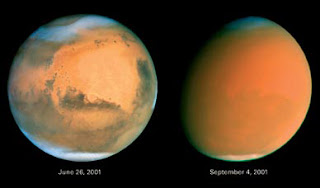 This is Mars, the Red Planet. This is where John Carter and his wife, the beautiful Dejah Thoris, Princess of Helium, live.

Or aren't you familiar with the Edgar Rice Burroughs Mars series? 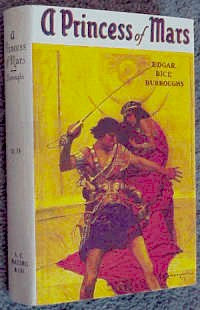 OK, this image was not obtained from "How Stuff Works." Instead, I found it here.

I remember reading the Barsoom books (that's what the Martians called their planet) when I was a kid -- and thoroughly enjoying them. I remember Heinlein working the John Carter saga into one of his books -- in an alternate timeline, I think it was, Barsoom was real. Some of these books, at least, have slipped into the public domain; here's a link to the Project Gutenberg edition of "A Princess of Mars."

I'm tempted to go and read it again -- but I have a reason to be hesitant.

As long as we're talking about proto-science fiction, I'll close with a confession that will explain my hesitation. I recently finished reading Jules Verne's "From the Earth to the Moon" and "Around the Moon." I never read any Verne as a kid. While I appreciate the remarkable parallels between the voyage as he imagined it and actual Apollo voyages to the moon... well... I found the books tedious. Boring, even. I know that's not supposed to be the way it works. And I'm afraid my jaded adult self won't like John Carter anymore either.

And I'm also afraid that I will still like Burroughs. That would prove that I'm just a Philistine. And I'd rather suspect it than prove it.

Anyway, please remember: Keep looking up -- unless there's pigeons in the vicinity.
Posted by The Curmudgeon at 10:19 AM

Thanks once again for the smiles and giggles! My hubby gives off lots of gas, too.

Have a good day!

You might want to try the story meme on my Journal.

Love the jab at Paris Hilton...hehehe!

Interesting post.
Have a great Tuesday.
Come by and visit.

This was a lot of fun. And informative. To think that Tarzan-author wrote that. How curious. Love your captions!

I am very partial to science fiction.

Yes, I always like learning something new each day, and I have now accomplished that.