Finding a silver lining in the dark clouds over Chicago 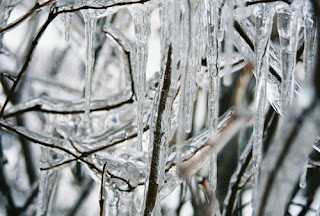 The weather has been miserable in Chicago for almost a week now and the forecast suggests it's going to stay partly to mostly terrible for awhile yet.

I realize it's been worse elsewhere -- but our little bit of ice on Sunday was quite scary enough, thank you. It was the lowlight of the crumby weather week.

Actually, it's in crumby weather like this when it truly pays to live in Chicago: Sunday morning, if you could get to your car without breaking a hip or an ankle, and if you could get the car to a main street without running into a tree, you were home free as long as your destination was within the City proper. At least since Jane Byrne beat Michael Bilandic in 1979, Chicago's snow and ice removal on arterial streets has to be better than any city anywhere this side of Alaska. You know when you leave the city limits during a Chicago winter: Your car begins to skid. We even got salt down the sidestreets this weekend, so all we had to do was get to the car.

If our ice storm on Sunday wasn't enough to snap power lines and so forth, as happened downstate or in Missouri, it was still quite enough to modify behavior. My mother-in-law, like all the other seniors in the parish, went to the anticipatory Mass Saturday evening. They were all anticipating the ice on Sunday. She said she hadn't seen so many people in church since Easter.

Younger Daughter had to work Sunday morning and we wouldn't let her take the car. That meant that we had to drive her. Once we got out, we went to the grocery, too, and on our way back saw the newspaper delivery van slowly working down our street, about three hours later than usual.

Foolishly, I slid out to the end of the driveway to receive the paper, rather than make the poor delivery kid risk her neck. I almost paid for my chivalrous gesture with a bruise on my tokus.

We thought we'd wait out the weather and attend the last Mass of the day on Sunday evening. But the church parking lot was no better for having sat, open and receiving freezing drizzle -- frizzle? -- all afternoon. There may have been more praying going on in the parking lot than inside the church.

The cable weather channel called the sleet and freezing rain that was falling on Chicago a "wintry mix."

Doesn't that sound festive? "Wintry mix" -- I'm thinking that's the kind of thing that Martha Stewart should serve to guests in hollowed out lacquered gourds that she grew in her own garden or something.

But there was one good thing about this crumby weather -- one thing that has provided me with no end of comfort as I set out into the gloom.

You see, Oldest Son was in California last week. For work. Training on some computer program or other. So he missed the first snow. And he made it a point to send IM's to Youngest Son about how he could eat lunch outside and walk down to the beach and how it was 70 or 80 degrees or something. And then to ask -- in wholly feigned innocence -- how the weather was at home....

But he came home this weekend. And he's stuck here with the rest of us all week long.... (*Insert evil cackle here.*)

Should I mention that it's been close to 80 degrees here for the past few days? That our yellow jasmine is blooming for the 5th time in 2007? that we're running the air-conditioner almost24/7?

Nah, I'll keep it to myself.

It's so lovely having your children around you. I dread the day when mine leave home.

Oh, Cur, you are wicked. But I guess misery loves company...

well it was almost 80 here in alabama today - but that is QUITE unusual.

It was in the low 80's here in Florida, today. This is the one time of the year that I do no miss living in Chicago.

Good post that reminded my of my younger days.

Okay anyone who uses the word tokus, is awesome in my book....personally I would have also probably said hiney.
I'm a tad north of you in WI so we are actually seeing the snow and not the ice....but my sis is down dealing with the same thing as you. She doesn't own a car, lives in the city and works in the city.

Knowing full well and good that what junky weather you have will inevitably land on my doorstep here in Pennsylvania (Why do midwesterners ALWAYS have to send that crapola east anyway?) I will not rag on your weather issues there because when that stuff does make its way here and dumps on me, I would like to think you will commiserate with me too then! Just stay safe (inside) whenever you can which is what I will do but people call me a recluse for being this way. I think of it as being smart!