Ode to medication -- Part 1 -- A reminiscence

Now so many of us aging Baby Boomers worry about what our chicken dinners ate and whether they lived happily -- until they stopped living, of course, and the less we know about that the better. And we want to make sure our vegetables are 'organically' grown, too. And yet there was a time when many of us would cheerfully smoke anything tendered in a plastic bag, wherever it was from, however it was transported, and whatever insecticides were sprayed thereon. (Granted, not all of us inhaled -- at least, that's what I've read.) 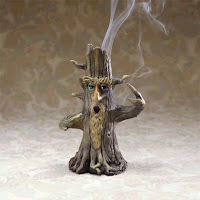 Actually, I was never a part of the "drug culture." Certainly not like two of the fellows on my dorm floor in undergrad. These two roommates retreated behind their door on the first day of school, put out a couple of incense burning trolls -- similar, as I recall, to the one in the picture -- and smoked dope all day and all night for the entire year. I don't recall them ever coming out to eat or use the bathroom, although I suppose this must have happened. Because they didn't die in there: There was a constant supply of new smoke to testify to that. And somehow the incense was replenished.

The incense, you see, was to throw any suspicious persons off the scent -- quite literally. Why, you'd never suspect that someone burning incense was also burning marijuana!

At least the users thereof seemed to believe that -- proving that dope does indeed scramble your brains.

I will confess that I was present on a couple of occasions when marijuana was used. One instance in particular comes to mind: The pre-meds were cramming for the MCAT, the test that would determine if they could get into medical school.

In those days, the MCAT included a section on general knowledge -- things that you might have picked up from history or culture if you ever took your nose out of a biology textbook. In short, this was the absolute hardest part for most of these guys -- and the reason why I was there even though I was probably in my first year and they were all seniors.

I thought it was just trivia, but the older students were truly amazed that I could spout correct answers on so many varied topics. So I felt useful and helpful.

After a long day cramming, the pre-meds thought it was time to relax. So we adjourned as a group to someone's room. I had no particular enthusiasm for what I knew was about to happen -- but I will admit to a certain curiosity.

One of the kids pulled the curtains shut. We were in a high-rise dorm, you understand, but there was apparently always the chance for aerial surveillance or something.

Another set up an incense stick and lit it so that no one could tell we were going to burn something else as well. (Have I emphasized strongly enough that these guys are probably all doctors now?) Someone else provided a towel to put under the door.

Eventually, after all of this preparatory ritual, a joint was produced and lit and passed around.

It was not a magic moment.

What I particularly recall was excusing myself after a time to answer Nature's call. I was standing in a stall and one of the pre-meds was in the adjacent stall. He asked, "Are you high?" I don't know, I said. "Well, I think I'm high. Yes, I must be high. Are you high?"

It was soon after this point that I bade a good evening to this rather tightly wound bunch of pre-meds and repaired to the nearest tavern. Beer and whiskey were far more legal and one could have far more intelligent conversations than "Are you high?"

Well, the conversations seemed more intelligent at the time.

This essay started off as a piece about the medications I took in the hospital and those that I'm currently taking. Not that you could tell: It appears that I've wandered off topic again. It may be the medications I'm taking, eh?

Well, I will try and do better next time....
Posted by The Curmudgeon at 9:30 AM

I didn't go to college, but I did my share of drugs..and even tried the incense trick the few times I smoked pot. (Pot made me vomit.) I had better luck with acid and Ludes. The latter I sold between classes in 10th grade, too. This period of my life only lasted about two years.

The good news is - - you were a quick study and had common sense. The older I get the more I realize that common sense is not common.

Not exactly on a high, it seems!

ha ha ha, curmy you must have some seriously good drugs in you honey!

Curmudgeon -
I love it when you wander of topic, it makes for a very good read.

Your college dorm story reminded me of my college days. Several of the "stoner's" that I knew in School went on to be Doctors, Lawyers and Businessmen.

I never got into that scene as my drugs of choice were caffeine, alcohol and nicotine.

drugs, like food become necessary with age, hope you are feeling well.

Did we live in the same dorm? I think I know the guys that you are talking about. There two guys like that in my dorm, too. Thank you for taking me back to my youth. Groovy!

Actually I like the smell of marijuana. Much nicer than tobacco smoke--alot like the incense they used to burn at tazie services in the Episcopal church. I was pretty tame in the 60s but I did note even then the irony of some folks toking dope from who knows where (or even what)and then eating a vegan diet. Some stoners never made it out of their dorm rooms, like Odysseus's men who slipped into the Land of the Lotus Eaters.

Curm, I think you are the first attorney I've come to know that didn't smoke pot on a regular basis at some point (that includes my brother).

BTW, me and my roommate had food delivered to the the dorm and we peed in the sink.