I learned something from yesterday's posts: I had no idea that this plague of bicycle helmets was so widespread -- and that it had even become legally entrenched in various jurisdictions of the body politic.

As a lawyer I understand that I have a rather highly exaggerated sense of risk.... Let me put it this way: Engineers look at a device or a situation and think about how it can be made better. A lawyer looks at the same device or situation and thinks about all the terrible things that might happen. 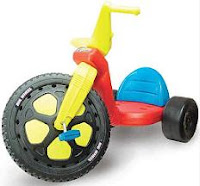 I once had a case where I defended a 7-year old who was riding a Schwinn Stingray at the time of the accident. He must have just gotten the training wheels off because he was five at the time he allegedly ran over the three year old plaintiff -- who'd darted out of his suburban driveway on a Big Wheel.

Well, no one can see a Big Wheel -- they're so low to the ground -- and our young plaintiff was lucky that he was hit by a Schwinn and not by a car. Because of this case, I resolved that my kids would never have a Big Wheel... and they never did.

And we've never had wallpaper either because many years ago I represented a mother who lost two children in a house fire just before Christmas. It was a bleak, rainy December day and my client had gone over to the church -- barely 10 minutes away -- to pick up her older daughter. Mom left her four and six year old sons at home -- why bring them out on such a crumby day? -- but as soon as she left the boys decided to go prospecting for Christmas gifts.

One of them found a lighter. They climbed chairs in the dining room to get a look at the top of a china cabinet. Somehow one of them lost their balance... the lighter ignited the drapes... and the children ran and hid.

It's an instinct, I've since learned, a remembrance of our animal past: Children will hide in closets or under beds when there's a fire -- they don't think to leave the room or the house. Children have to be taught to try and escape a fire; otherwise they will automatically (and often tragically) seek refuge instead.

The fire spread from the drapes to the wallpaper; burning pieces of drape fell on the carpet, and it also burned.

But there was no conflagration. The fire was out by the time mom came back -- but only because the fire consumed all the available oxygen in the well-insulated suburban house -- and the boys were found, suffocated, under one of the beds.

The father, as representative of the estates of the children, sued the manufacturers of the wallpaper, carpeting, drapes, and lighter -- each of whom in turn sued my client, the bereaved mother.

No, we've not had wallpaper in our houses.

I realize that I see the 'dark side' of everything -- but I also realize that you can't have a viable, vigorous society if you are constantly trying to insulate everyone against every conceivable hurt or mishap.

Now why can't society see this, too? How do we draw lines here?
Posted by The Curmudgeon at 11:19 AM

As a parent, I'm always trying to see things from my kids point of view so I can prevent accidents. It's hard because you don't want to be overprotective, just proactive. Things will happen, no matter what you do.

I once fell down a flight of stairs while on a site inspection for a job at work. Luckily I was carrying a huge job folder and it literally kept me from losing all of my teeth and probably breaking my nose - I fell face first down the stairs.

I did mess up both of my legs pretty badly but I felt pretty good that it wasn't worse.

When I spoke with the insurance lady (it was covered by workers comp since I was working at the time) she asked me if I wanted "to do anything about it". I didn't get it until finally it dawned on me, she was asking me if I wanted to sue the building.

I just laughed and said "Why, I should sue them because I'm a klutz?"

Another time, at Target, my son reached for a book off of a display of popular items geared towards babies. I won't mention the name but it's supposed to make them smarter, and it's very popular now.

Anyway, the book fell off and hit him right below the eye, hurting him. It was a thick cardboard book and when I went up front to ask them to change their display they asked me if I wanted to take action.

I just said "yes, I want to prevent someone else from really getting hurt. That's the action you should be taking!"

It's interesting, the world we live in.

(sorry this is so long, but I figured a long answer was ok on your blog as you tend to have long posts, haha).

You have a very fine blog here.

Plato pointed out the fatal flaw in democracy a very long time ago.

The rights of the individual have become a nightmare in America.

Nice piece, I enjoyed it.

I don't know how we became such a litigious
society. About 15 years ago, I had surgery, and the doctor left a sponge inside of my gut. Yeah, that's a big boo-boo, and it made me very sick. Everyone told me to sue the doctors and the hospital. My doctor said he made a mistake and that he was sorry, so I didn't sue. I just asked that my medical bills be taken care of, and that I be paid for lost wages. I was a single mother and I couldn't afford to miss a paycheck. I'm glad I didn't drag a good doctor through the mud. No one is perfect.

MJ -- you illustrate a good point. I'll bet whatever you went through looks a lot less terrible now than it did then... but even then... it sounds like you didn't have really terrible damages: Yes, it was a mistake and it had to be corrected... and that was presumably unpleasant... but it was corrected. Even if you'd been litigious, chances are it wouldn't have been a 'big' enough case to interest a qualified med mal attorney (and I'm not one -- but I know a number who are -- and that's the basis of my opinion).

Sari -- not too long a response -- very thoughtful. And just like MJ and the sponge, in your son's case, there was negligence (probably) in the way the books were stacked... but fortunately the injury wasn't so serious that litigation would really be appropriate. (I don't mean to suggest for a minute that the experience wasn't really scary... at the time.)

This is a thought provoking subject to be sure. We're just now studying products liability in torts and it gets me thinking . . .

The biggest problem that I have with the litigious society is that those who aren't injured inure the world to the plight of those who are, legitimately hurt.

I know, from experience, that it is difficult not to become jaded, and presume that everyone is blowing their claim out of proportion.

BTW, it was skateboards and trampolines that were banned in our house...much to my kids' chagrin.

Mr. Johnson -- I didn't mention skateboards or trampolines... but, yes, these were also banned in my house.

I think that's a good personal opinion. All too often nowadays, society tries to wrap us up in cotton wool, in case we sue them. In doing so, it spoils the enjoyment for the majority.

Kids suing kids? Well parents doing so, but you know what I mean. What in the world are we teaching our children?

One takes responsibility for one's actions when one plays on these things - accidents happen - see sponge story - we just need to pay more attention to what we are doing and more self resposibility - that would stall the legal battles over stupid things.... arggh... bob johnson and cathy I agree with you both...

Accidents happen, which is why my kids where cycle helmets - it's an easily identifiable risk, which can then be reduced.

We need to accept that accidents happen, and sometimes it's nobody's 'fault'. But while there's a buck to be made...

My wife and I are/were health & safety professionals, so we tend to look at things in the manner of 'reasonably practicable risk-reduction'.

Can it reasonably be done? Will it reduce the risk? If so do it. Too many people (and I'm afraid, lawyers)look at it as risk removal, not reduction, which is impossible. You cannot allow for every situation.

I should get my own blog...

morning curmy, how are you feeling my friend? you have not talked about that in awhile...

I don't think there is a need to ban any form of sport as long as we teach them about the safety aspect of the sport. If you want to learn any sport there are inherent risk involved...if you are made aware of and you follow the rules for the sport....injury should be minimized. To sue another for your injury whilst play in their backyard just boggles my mind. That is greed speaking. If the child did not know how to use something they should never have been allowed to attempt to play.

Being a nurse and living close to a ski mountain I see ski injuries all the time. Should everyone stop skiing? I don't think so....it is an inherent risk of the sport...learn it and try to minimize the risk. Now if the injury is cause because you didn't wear your helmet, or your seat belt, your proper safety equipment...then that is another story.