The Liar's Diary: The cumulative weight of secrets 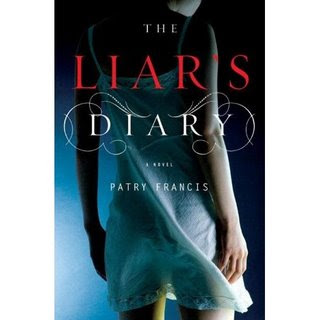 I've already written about my pre-surgey shopping expedition to buy Patry Francis' new book, The Liar's Diary. In that post I said that I'd started the book already, even though I bought it to read while recuperating; as it happened, I also finished it before going into the hospital.

Yes, it's a page-turner: You'll not want to put it down, particularly as the plot gets rolling.

You may start by thinking that this is a book about an unlikely friendship between Jeanne and Ali. Jeanne is the respected and efficient high school secretary; mother of a troubled teenage son, Jamie; and the wife of Gavin, a respected orthopedic surgeon in a nice New England town. Ali (short for Alice) is the new music teacher at the high school -- and so much more besides. She's a composer, a musician, and the wife of George, once a famous trial lawyer, now teaching philosophy at the local college.

But The Liar's Diary is not really a book about friendships; it is a book about secrets. Corrosive, even deadly, secrets, layers upon layers of them.

Hmmmmmm. An anonymous blogger reviewing a book about the perils of secrecy: My delusion is under attack!

The author left a little license for me in the comments to my earlier post. She said that George, the lawyer, was her favorite character in the novel. (She might have meant the young lawyer who ultimately represents Jamie -- all the lawyers come over well in this novel, which is unusual -- but I don't think so.)

George isn't a wimp. He understands that the secret of Ali's past made her into who she becomes. He is wise, and his intuition is sound.

You'll see some of the secrets coming when you read The Liar's Diary -- but I'm willing to bet you won't see all of them. Once I thought I had figured out one character's secret. I was waiting for Patry to prove me right. It was like waiting in the train station at the wrong end of the platform: The plot didn't even start braking until it passed my position.

Now, the secrets in The Liar's Diary are dark and terrible -- not usually a subject for an entertainment, even in a mystery, which requires a certain amount of criminal behavior in order to exist. But Patry is not using dark and unspeakable crimes to 'entertain'; the most horrific action takes place off stage. Rather, Patry is concerned with the consequences of the terrible secrets more than with the terrible secrets themselves. And we can be swept up in, and, yes, even entertained, as we reveal the secrets and their consequences. I was.
Posted by The Curmudgeon at 10:13 AM

well it appears you are feeling a mite better my friend! great news indeed! now about that video? we are all waiting you know.

sounds like a book I am going to have to pick up. sorry I haven't been around for awhile...reading some of your recent posts...seems like things went well..and you are sounding so very positive....that is so nice to hear....cheers!

I'm always looking for a good book, thanks for the incentive. I'll read this!