Somehow I doubt that St. Patrick would approve of the celebrations that mark his feast day here in America.

And, while I know there are people in New York or Boston who might disagree, there's no place in America that takes St. Paddy's day quite so seriously as we do here in Chicago.

People might think our enthusiasm for St. Patrick's Day is a legacy of the many Irish politicians who have dominated public life here for so very long -- but there's a lot of cities which have been blessed (or cursed) with Irish-dominated political machines. But I think the biggest reason for our particular enthusiasm is the proximity of the good saint's feast to the political primary date.

We say that everyone in Chicago is Irish on St. Patrick's Day -- and sure they are, if only to muscle their way to the front of the parades and be seen by all the voters. 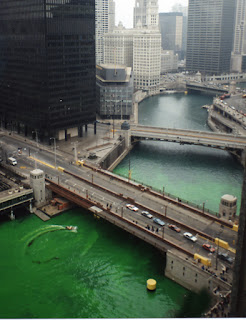 I've marched in a few of the parades, both Downtown and in Beverly, over the years, and seen a few more besides.

And, yes, they do dye the Chicago River green for the occasion.

And do you know what color the dye is that turns the river green? (Well, greener.)

My first St. Patrick's Day Parade was in 1977. Richard J. Daley had just died the previous December and the parade was to be dedicated to his memory.

Someone mentioned that our student group could march with one of the North Side ward organizations if we would build a float. I'd stuffed my share of napkins into chicken wire building floats for high school homecoming parades, so I was enthused by the prospect. Someone else said they knew of a flat wagon that could serve as the platform for the float; he was sure we could get it, use it, and return it before the Park District even knew it was missing.

Because I was the elected head of the invited student organization (and only for that reason) I was included in the party which had to see the Committeeman to confirm our participation. Since the Committeeman was the one who invited us in the first place, we didn't have to sell hard to secure his permission to join in. He had only one question: How many people will you turn out?

"Well, sir," I hemmed and hawed, "A lot will depend on the weather -- we'll surely have more if it's a nice day. And it is right before midterms week; that could hold our numbers down."

The Committeeman regarded me with the pitying look that one might give the hopelessly addled. He spoke slowly this time: How many people will you turn out?

I opened my mouth -- but one of the people who was there 'with' me -- he was a member of both groups and had been the original conduit for the invitation -- spoke before I could make a greater fool of myself. "250," he said.

I didn't say anything until we were safely out of the meeting and on our way back to school. "What possessed you to promise 250 people?" I asked. I may have used a few additional words for emphasis.

"It'll be alright," my friend assured me. "He just needed a number." He explained: It wasn't an important number -- like how many votes you'd turn out in your precinct on election day -- it was just a number.

We had very elaborate plans for the float. These plans became less and less elaborate as we attempted to execute them.

By the wee small hours of the morning of the parade we had scaled back our ambitious design by 80% or more -- and we still weren't done. Still, it was decided to move the float to the staging area in the hopes of finishing it there.

In those days the parade formed up north of Wacker Drive, north of the Chicago River. We were assigned a spot on Clark Street.

Today this area is the very trendy, very expensive River North neighborhood. There are new skyscrapers everywhere -- hotels, office buildings, condominiums. But that's not what it was in 1977.

Still, we got the float done, on time, although the borrowed platform had exhibited a distressing tendency not to turn when circumstances dictated.

Crowds of revelers descended on the staging area as soon as it was light, increasing in number and degree of intoxication as the minutes ticked by for the parade to begin lurching down State Street.

There was only one relatively deserted spot -- by our scaled-back float.

As if miraculously, however, minutes before we were to being what looked to be a lonely journey down the parade route, shuffling along in disgrace, hundreds of students showed up. I have no idea where they'd been.

We just had time to form them up a little. I'm not talking about military precision here -- it was more of putting those people who seemed to having trouble standing up straight into the middle of the group.

But at last we were ready to go down the street, and just in time, too. And when the float pulled away from the curb, what should remain behind but a small mountain of beer cans?

I don't remember where the parade pulled off of State Street -- but our borrowed float platform balked at this one last turn. We wound up at some place -- I think it was called Charlie's -- well south of where we were supposed to be.

I was past caring.

I hadn't slept. I was relieved that we'd not done anything really stupid in the vicinity of the reviewing stand or the TV cameras. And I was ready to celebrate with a drink, even though I figured I'd probably pitch forward in a coma upon contact with alcohol.

But adrenaline kicked in moments after entering the tavern: I noticed everyone was carrying guns. My panic attack ended, however, when someone pointed out that we were across the street from Police Headquarters -- 11th and State.

And I still have the ribbon that was given me that day -- as a parade 'marshal.' I'm holding it up to the screen now. What do you think? Isn't it nice?

And here's the answer to today's pop quiz: The dye used to color the Chicago River green for the Downtown St. Patrick's Day Parade is
Orange.
Bright orange.

I'm pleased to be first to comment. Happy St. Pat's day! This may be your best post yet. My father's family was Chicago Irish. Mostly I like this post because it shows that you have been your own Don Quixote self for a long time. I hope you have a good time today and don't do anything to tax your staples.

That's a well-written feature on the day.

Ironic? Absolutely, and also downright scary! I've been trying to explain to my Italian fiance the whole St Patrick's Day thing--the green Chicago River is bound to do the trick. Thanks, and Happy St Patrick's Day!

I think the ribbon looks lovely, it really brings out your eyes.
Happy St Patrick's Day!

Did you ever find out where all of those students showed up from? Just curious, of course!

And yes, that's a very lovely ribbon; I concur with Claire that it brings out the color in your eyes - which even if they aren't Irish are definitely smiling!

Hope you had a Happy St. Patrick's Day!

Lovely ribbon! Great trivia for the kids to work on figuring out.

I learn something every day when I read your column...

Your float story is priceless!

Claire, Linda -- I was thinking that the lovely green in the ribbon brought out that faint green pallor in my cheeks -- and, sure, though me eyes are as Irish as the rest of me, I don't know that the green in the ribbon goes terribly well with their primary color... bloodshot....

And, no, I never did know where the students came from -- I was too grateful and relieved to ask a lot of questions.

Ah a beautiful description of your pallor!
Alas still no photo of you to put up as my screen saver.

curmy have you thought about going back to work yet honey? you are running a little long winded, perhaps a few pleadings might help?

What a great story, I love it!

I wouldn't have guessed orange. We just made playdough (orange playdough) and it just seems weird to me!

Congratulations. You've been tagged! Check out my blog for details.

hi curmy, sorry about the comment yesterday i seem to have left them all over the blogesphere. something to do with my meds i'm sure, sorry...

I found you through Dr. A but YOU hooked me with the Ozzie/Harriet Ozzy/Sharon line. I never really thought about it but damn, I'm old!
Sadly I will have to add you to my already too long blog list.

A little late. But hope you had a great Saint Pat's. We got socked with more snow, but it was fun. I should have gone out and died the snow green!

Orange, heh? Never would have guessed that one.

Hope this finds you well!