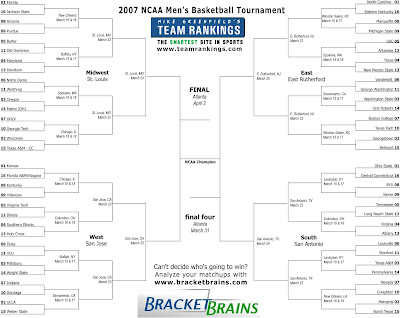 Youngest Son is running the brackets pool in his junior high homeroom.

Another (lesser known) loop is closing in the Circle of Life.

Back when I practiced with a firm, I was the commissioner of our annual basketball pool. It was a big pain in the neck -- certain people always seemed to hold back on putting in their $10 until the first few games were played. As if those first few games would establish an absolute trend that would provide assurance that their entry fee would come back to them.

Then there were a couple of others who always seemed to stall getting their sheets turned in until the last possible moment... maybe even after tipoff of the opening games... but, honest, no, they weren't checking scores or anything. Heaven forfend!

(My latest ambition is to be the number one response to searches for 'heaven forfend' -- as you can see, my ambitions are in steady decline these days....)

The firm opened up the pool for secretaries, the clerk, friends and relations -- but not for clients. Never clients.

We wanted our clients to believe that we were far too serious to engage in frivolity of this sort. And no client ever investigated the truth of our claims, so far as I know, probably because they were all too busy with their own pools.

The winner of our pool would get at least half the prize money; the balance would be paid out to the next few finishers. I don't think we ever arrived at a set pattern on this, but I think the pattern may have been that, if I ever came close to finishing 'in the money,' we'd cut back on the number of winners for the next year.

There was only one certainty about the prizes from year to year: No one ever wanted to actually win our office pool. Winning came at too high a price. In a strange combination of the principles of March Madness and noblesse oblige the winner was expected to plunk his winnings on the bar of a nearby tavern so that we could all celebrate his good fortune on his nickel.

Now, you will have noted that the language in the foregoing paragraph bespeaks an assumption that the winner of our pool would always be male. And you may say that this is a sexist assumption.

And, of course, you'd be right. But, you see, the assumption cut across gender lines. Starting the party was the only real way to induce the female staff into putting their own sawbucks into the pool -- they also assumed they could not win, but this way everyone stood to get something out of the deal.

And, in the harsh world of real-life experience, this random, sexist assumption worked out... badly.

There are two basic ways to prepare for the task of completing your NCAA brackets.

First, you can study all year long, starting with (as we did at my old firm during some of the early years) publications like Street & Smith's pre-season analysis. Then you would watch every game, read every article, consult every oracle (including the post-season record of every tournament team). After all this, you'd lock yourself in seclusion, pausing to neither eat nor sleep until each game you'd resolved each and every game, as if in a vision. Your completed bracket would be drenched in sweat... but steeped in unquestioned expertise... and you would surely be assured of staying in contention for the prize until about the conclusion of the first weekend of tournament play.

Second, you can pick teams at random. By just guessing you can almost certainly be assured of staying in contention for the prize... until about the conclusion of the first weekend of tournament play.

One year the pool was won by a secretary who made her choices on the basis of which team had cuter uniforms. Another year the pool was won by a female associate who based her choices on which city she preferred to visit. Texas Tech is playing Boston College this year? She'd decide whether she'd prefer to visit Lubbock, Texas or Boston, Massachusetts and choose accordingly.

Now that I'm self-employed, the concept of the office pool does not appeal to me nearly as much as it once might: Sure I'd win -- but I'd also finish last as well.

I've toyed with the notion of entering Youngest Son's pool in the junior high... but I don't think I can stand the humiliation.

And I don't follow college basketball like I used to. I saw players like Kevin McHale and Larry Bird when they were in college -- up close from the first row of the bleachers in a small gym. But it was a different game then: Without a shot clock, an undersized, less talented team might give a stronger, talented team a close game. The underdog might actually win on occasion -- if the undersized team had the patience to work the weave. The Four Corners. The Stall.

Yeah, I remember the old joke: Who's the only coach who can consistently hold Michael Jordan under 20 points a game? (Answer: Dean Smith, Jordan's own college coach, because North Carolina ran a beautiful Four Corners offense from time to time.)

But when the weave would be broken by an athletic steal and resulting fast break, the fast break was louder and more wonderful than ever it could be in an exchange of dunk for dunk or trey for trey. The same people who thought the Four Corners was boring probably think a no hitter is boring in baseball.

But I'm starting to rant again, aren't I?

Go back to picking your own brackets and I'll get back to you tomorrow.
Posted by The Curmudgeon at 1:14 PM

One of my favorite things about March is March Madness. There's just something about going to sleep and my husband still watching basketball at all hours (not that he stays up all hours, but just that it's on).

It's like taking a nap during football, just a good thing. Don't ask me why.

You can tell I follow the teams, right? ha ha

Okay, this is why I never did these sorts of things - it's too much like work and results in mass confusion in my tiny little pea brain!

Well, that and the only luck I have is bad luck!

Thanks for teaching me a new word today. Never heard the word "forfend" before.
As to basketball pools, I don't partake. Like Linda I also feel like it's too much like work.

P.S. to Sari: Nice to know someone else who enjoys taking naps when a football game is on. It's great background noise, isn't it?'

I am more of a pick a square on the grid for any given game. I just don't have the gene that allows me to actually pick this and that through the whole season.

I love basketball (college) and I love march madness. Back when I worked at the law firm I won it 3 times in 9 years - the bracket thing. It was fabulous. I bet they don't miss me this year!

You'd be surprised how many folks these days use "heaven forfend" at least I was. I scrolled through 40 pages of Google search results before I gave up. Two weeks convalescence have made me a bit weird.

basketball is another thing i never "got". i think it it all those tennis shoe noises on the wooden floors that make me cringe. feeling better curmy? sounds like it.

I picked mine yesterday @ work, although I really know nothing about the standings. hahahah.