Wheezing and sneezing through the Holidays 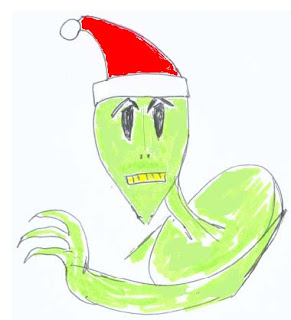 Now you see why there's no original artwork here at Second Effort; herewith proof positive of my complete lack of artistic ability. (I may be the only guy who ever flunked the matchbook test. Think about it. If you're old enough, you'll get it eventually.)

This crude drawing was from my attempt, in 2006, to introduce a new creature that seems to visit everyone over the Holidays, good or bad, without exception: Boogaloo Bug.

Well, I don't know if it was Boogaloo that came to my bungalow this weekend but let's put it this way: I feel awful right now. And that's such an improvement over how I did feel that here I am back in the office.

We were invited to a neighbor's house on St. Stephen's Day and I really wanted to go -- but I used up the last of my energy sitting with Middle Son at the local Ford dealer while he purchased a new car. My son wanted me along for reassurance. I don't know why. He was buying a car with no money down, promising to pay back enormous sums of money on the strength of income from a job that he hasn't started yet. I was certainly less than reassuring on this: I couldn't imagine how the heck anyone would let him do this. But... apparently... it has been done.

I spoke briefly with a colleague today who had a pretty good insight into why I might have been felled by this virus.

I had an oral argument in the Appellate Court the week before Christmas. In the state court in Chicago we used to get oral arguments much more frequently than we do now -- so this was a big deal all by itself. This was also a case for a client that could lead to other cases... so, even more so than usual, I wanted to give a good accounting of myself.

I found out early last week that a decision would be issued in that case on Christmas Eve. You'll just have to trust me when I tell you that such rapid turnarounds are exceedingly rare in the Illinois Appellate Court, at least in my experience. I did once have a decision come down nine days after argument -- and it was a devastating loss. Even though I thought this argument went well, I couldn't help but think of that earlier case.

I had another matter pending in the Appellate Court since March, when the briefs were closed. This was my first appeal for my single biggest client and one on which I lavished a great deal of care and attention and stomach lining. I received an order early last week that this case had been taken on the briefs, without argument. I wrote the client that we could expect a decision soon. The next day I received a notice that a decision would be handed down in this case on Christmas Eve as well.

Yes, my colleague told me, you probably worked yourself up into such a state that you were susceptible to any bug that came along. (Even one as badly drawn as that above, I suppose.)

And then, to top it all off, I found I'd lost the case taken on the briefs.

Yes, my colleague's explanation is as likely as any other.
Posted by The Curmudgeon at 12:37 PM