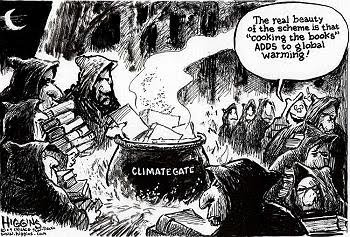 (Jack Higgins cartoon obtained from the Chicago Sun-Times website.)
The recent revelations of scientists 'cooking the books' to support their pet theory of human-induced global warming and the selective revelations earlier this year about major league baseball players testing positive for banned substances in 2003 have a common link, in my opinion.

Both stories arise from leaks of information that was not supposed to be revealed. In the cases of Alex (A-Rod... or A-Roid) Rodriguez, David (Big Papi) Ortiz, Manny Ramirez, et al., results from their tests (and the positive test results of 100 or so other MLB players) were supposed to be (a) kept private and (b) destroyed. However, as Michael S. Schmidt explained, in this July 30, 2009 article in the New York Times (genuflection optional), "[F]or reasons that have never been made clear, the results were not destroyed and the first batch of positives has come to be known among fans and people in baseball as 'the list.' The information was later seized by federal agents investigating the distribution of performance-enhancing drugs to professional athletes, and the test results remain the subject of litigation between the baseball players union and the government." The Times got information about particular players from lawyers involved in that litigation who violated their ethical obligations, court orders and (presumably) HIPAA by blabbing.

(I would really like to know if anyone has been called to account for this. Has anyone seen anything on this?)

Climategate, too, has arisen as a result of clandestine snooping, possibly by Russian computer hackers, who lifted emails and other files from the University of East Anglia's Climate Research Unit. These materials call into question the validity of the conclusions reached by supposedly objective scientists about human-induced climate change. Apparently even some of the scientists sounding the alarm were squeamish about the lack of data supporting their ominous conclusions. Some of these materials address how to rearrange the data most persuasively; others talk about how to silence dissenters. (Read more about it, if you wish, here or here.)

Somehow, though, I'm more willing to forgive the thieves who broke Climategate than I am the gossips who gave us A-Roid.

Is this just a reflection of a political inclination?

I suppose those who believe that man has caused and that, therefore, man can stop climate change -- no matter what the evidence -- will say that my judgment is entirely political.

The climate of our Planet Earth has been changing from the time the planet formed. It will continue to change if mankind ceases to exist tomorrow; it will continue to change if mankind impoverishes itself trying to stop it. We can not more stop climate change than a six year-old can hold back the tide. On the other hand, man surely must influence climate, at least in settled areas -- and maybe, given the complexities of current and wind patterns -- in places not so settled. Maybe pollution from human industry has accelerated thawing at the North Pole. (Who knows? Santa Claus may need swim fins in a few years.)

The politicians and bureaucrats from around the world who have gathered in Copenhagen for the United Nations Climate Change Conference may make decisions that cost billions and trillions and affect lives all over the world... based on lies? Based on incomplete or doctored evidence? Google news results are filled with alarmist stories about how this is the 'hottest year on record' and so forth.

But this is nonsense. Greenland, for example, is not yet as warm as it was when it was settled by Viking colonists.

If there really is a global warming trend, whether (and however) it is influenced by human activity, we need real science, and real scientists, to help us learn how best to cope and respond. We don't need PhD's fishing for huge grants manipulating data. Thus, the revelations about Climategate are so alarming that I am prepared, for now, to overlook the unsavory way in which the materials were made public. On the other hand, I want the lawyers leaking the 2003 steroid list to be disbarred.

If this is inconsistent, I apologize, but that's the way I see it.
Posted by The Curmudgeon at 8:55 AM

Email ThisBlogThis!Share to TwitterShare to FacebookShare to Pinterest
Labels: Legal, News and Views