A Christmas tree (?) for safety-conscious Brits 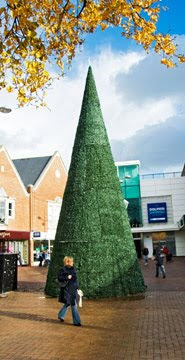 Simon de Bruxelles' article for the November 27 Times says that various onlookers have compared this odd-looking thing to "a giant traffic cone, a witch’s hat or a cheap special effect from an early episode of Doctor Who." But it is none of these things. It is, instead, a Christmas tree for the shopping area in Poole, Dorset, "designed according to the principles of health and safety, circa 2009."

"Thus," writes de Bruxelles, "it has no trunk so it won’t blow over, no branches to break off and land on someone’s head, no pine needles to poke a passer-by in the eye, no decorations for drunken teenagers to steal and no angel, presumably because it would need a dangerously long ladder to place it at the top."

The town used to have a real tree that cost £500. It had lights strung on it, as did its predecessors in the square for decades before.

This artifact, however, "which is constructed on a metal frame overlaid with what appears to be artificial grass, cost £14,000 and comes with built-in fairy lights and hidden speakers to play Christmas tunes that will put shoppers in the festive mood." Are the tunes evaluated for safety as well?

The Times article quotes a local official who harrumphs that, while the old tree might have cost only £500, it was necessary to spend another £3,500 to make the tree safe with "guy ropes and hoardings to stop it from falling over and hitting somebody." So the good townsfolk of Poole have really only been bilked out of £10,000?

I came across this story via a December 1 posting on Overlawyered.

But it's not just lawyers that are to blame for this, are they?

And we can guffaw all we want at our British cousins -- but this 'extreme safety consciousness' that abandons tradition, good taste, and common sense is gaining traction on our shores as well.
Posted by The Curmudgeon at 9:06 AM

Email ThisBlogThis!Share to TwitterShare to FacebookShare to Pinterest
Labels: Christmas, News and Views

That tree actually makes my heart hurt a little.

Interesting... I was searching this info for my uncle. He will be happy for such a great info. Thanks for sharing...
Ana