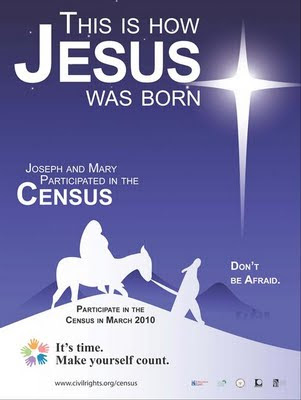 That's the charge leveled by Rev. Miguel Rivera, chairman of the National Coalition of Latino Clergy and Christian Leaders, according to this December 14 USA Today story by Haya El Nasser.

Not only is the ad "blasphemous," Rivera claims, according to the linked article, it also violates the separation of church and state. I'm at a loss to see how the reference is blasphemous.

The claim that the ad somehow blurs the line between church and state might be more meaty except that El Nasser's article quotes a Commerce Department spokesman as saying that the government neither designed nor paid for the ad. The poster says it is the product of an outfit called civilrights.org; the website of this organization has a page with links to various translations of the poster.

Actually even if government money had been spent on the poster, while I might have strong reservations about the wisdom or necessity of the expenditure, I don't think I'd be all a-flutter on constitutional grounds. To me, citation to the Christmas story is a clever and seasonally appropriate to call attention to the upcoming Census -- the reference is likely to be understood by most people seeing it, even non-Christians. I don't see that the ad somehow endorses either Christianity generally or any sect thereof specifically, as a State Religion. Judging from some of his prior posts, I'd guess that Dave would disagree.

Email ThisBlogThis!Share to TwitterShare to FacebookShare to Pinterest
Labels: Christmas, News and Views

Cheap shot, maybe; but, you made me laugh out loud.

I assume if it gets up to the Supremes, Scalia would see the ad as an homage to all endigenous people in occupied territories.

Sorry to most of the rest of you: the inside joke refers to the Justice's comment in an oral argument that a cross was a tribute to soldiers of all faiths.

An aside, Blogger doesn't know how to spell indigenous.

Anybody notice that I spelled the word two ways?