Sprucing up the place a bit: an award, a new gizmo, a milestone, and general housekeeping

Barb, of Skittles' Place, was kind enough to give me this award back on February 25 -- or, in Skittles' world, about 200 posts ago -- and I have been slow to acknowledge the gift. Here it is: 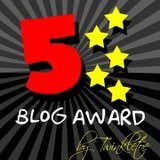 I'll probably lose at least a star because of my breach of etiquette.

And see this little teeny tiny symbol at the left?

You'll find another of these at the bottom of every post now, at least for the time being. You'll note that I sometimes say I "Stumbled" on something? Well, by pressing the "Stumble It" button at the end of one of my posts, you can put my drivel even further out into the Ether where idlers such as myself, mindlessly clicking away on our own Stumble! button might find it. This is supposed to build traffic -- so, if you decide to press the button for something I wrote, make it something you actually liked. I say this knowing full well that the button might now never be used....

I feel very pleased with myself about inserting the code for this properly, until I look at other blogs -- like Ellee Seymour's, for example, which has about 92 different codes inserted at the bottom of each post, or Rhea's (The Boomer Chronicles), which has only about half as many. So, for now, I'll ignore those realities and focus on my modest achievement, thank you.

And, speaking of modest achievement, just after midnight on March 1, this blog welcomed its 25,000th visitor.

To give you an idea of just how modest this achievement is, Skittles' Place has logged over 80,000 visitors in a blog of similar duration. Still, it's a milestone of sorts.

Visitor 25,000 was a Comcast subscriber from a Western suburb of Chicago who arrived looking for a picture of Chicago's Stockyards.

You'll find a little of everything in this blog.

One new thing you'll find this morning is my slightly spruced up Sidebar. I've added in more folks who have linked to me at one time or another. Some have told me about it. Some have tried to hide it, even from themselves. And some sites no longer exist: I recently had to take out Dr. A's "I'm a Blogaholic" link because he just took down the site. But here is the current list:

If I've forgotten to include you, please let me know.
Posted by The Curmudgeon at 7:29 AM

Just wondering here - when you did the adds to your favorites, was the page layout thing on blogger working so you could scroll down the sidebar? I need to make a lot of additions to my favorites but the other day when I went to do that, the scrollbar on the sidebar thing on page layout/elements would only go down about 1/4 of the way on my sidebar. Just a little irritant in bloggerland I suppose.

That's quite the impressive list, I'm thrilled to be a part of it!

Congrats on the 25,000th visitor, too, that's a great achievement!

Jeni -- from your description, I'm not sure I understand the problem. This blog was never converted to the current Blogger format so I just edit the HTML. But I've fiddled with another one that does have the current format and I found that I had so many items in the Sidebar that I couldn't see anything but the 'add page element' for the page footer. Even though there are two things in the footer on that page, I couldn't see them from the "Layout" screen. But I could still access them if I needed to. (I checked.) Was that what you meant?

Awesome...I still rate on someone's blogroll besides that of my wife...
Guess I would be a little more famous if I posted more than the usual 5 times a year, eh?

LOL don't worry honey (addressed to CS,above), I post way more than five times a year and I have about the same amount of comments you do unless I'm posting on a hotbutton topic or join a blogtrain. Glad I'm still on the list, Mr. Second Effort in the Undisclosed Location :)

Suh-weet. I made it on the list. Thank you sir.