A blockhead writes on writer's block

I am amazed, frankly, when I read posts by my fellow bloggers complaining of writer's block.

So many people, apparently, face the screen, or the blank sheet of paper, and can't think of a thing to do next.

My problem is quite the opposite. This morning on the train I roughed out several posts for this blog and an idea for an interview I could run somewhere else -- I probably won't execute any of them, unfortunately, because of the sad necessity of scratching out a living.

I had an idea for a post about Irish music -- a humorous story (I think) about the time Long Suffering Spouse heard me listening to a new Chieftains album and was appalled at how depressing the lyrics were. Yes, the song was about someone being hanged for a crime he didn't commit and his brave young widow and the likelihood that she'd starve. "That's one of the happier songs," I told her. If I had the time, I could flesh that out.

And then I read Zay N. Smith's Sun-Times column, QT, and I was struck by these two entries:

Jim Holloway, a Chicago reader, regarding the Yellowstone Caldera (the eruptions of which can be violent enough to send a layer of ash 6 feet deep as far away as Chicago and which erupts every 600,000 or so years and last erupted 640,000 years ago), writes:

The March 12 tally isn't complete at this writing, but the number seems to be subsiding.

Asteroid 2008 EM68 became on Wednesday the second asteroid this week to be discovered only after it has passed between Earth and the moon.

Asteroid 2008 EZ7 passed between Earth and the moon this week, also, but was discovered a few hours before it passed.

I've mentioned the Yellowstone Caldera here before (that's a link to the Wikipedia entry about it; here's the link to the USGS summary about the phenomenon).

If you want to see real climate change -- not to mention human extinction -- just wait around until a supervolcano goes off or a good size asteroid hits Mother Earth. These things have happened before -- you could ask the dinosaurs about it, if they hadn't been wiped out -- and one of these events will happen again. Soon. Maybe "soon" as in a few thousand years. Maybe "soon" as in a week from Tuesday. That's the problem with the future: We can't see it clearly.

The binary star system is 8,000 light years away, however, so if it exploded tomorrow, we'd have 8,000 years to prepare. Problem is, we wouldn't know it -- because the image astronomers see takes 8,000 years to get here. The stars could have exploded 7,999 years ago... and wouldn't that be an unpleasant surprise?

Meanwhile, in low Earth orbit, Shuttle Endeavour has linked up with the International Space Station and the astronauts are floating around getting ready to assemble a laboratory. 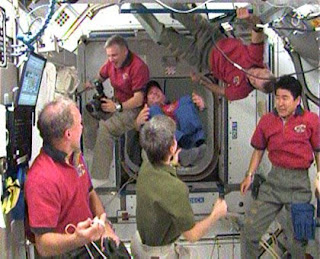 We have no real plans for moving out as a species into space. Even the most tentative proposals for human exploration are criticized and continually postponed and scaled back because we have social problems here to solve first.

Let me tell you something my mother used to tell me all the time: "Man proposes, God disposes." We can plan all we want... reduce our carbon footprints to teeny tiny indentations to make a paradise of our blue planet... but God (or Nature, if you insist) may have other ideas for this place. If any of us survive it, we'll have lots of social problems after an asteroid hits... or Yellowstone erupts.

But I'd want to give you the earthquake data merely alluded to by Mr. Smith this morning and cite you to the asteroid data as well. And, today, I don't have the time. 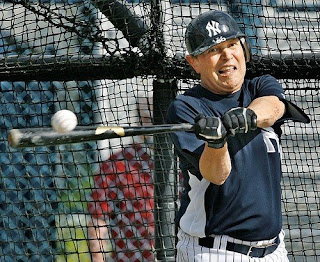 So I can't write about that.

I could have written about Billy Crystal's one day contract with the Yankees -- that this is a wonderful thing, even though (as a lifelong White Sox fan) I am generally sworn to hate the Yankees and anything associated with them.

I may yet write tomorrow about yesterday's Very Long Day for Younger Daughter and Youngest Son.

So I don't understand the concept of writer's block.

Writer's bottleneck, perhaps: So many ideas, all competing for elaboration that none get expressed adequately. As in this morning's example.

Where I have failed is not in failing to write, but in failing to find a way to make writing what I want to write about into something that I can do and still eat. I haven't time to ruminate on this failure this morning, though: I have pleadings to write for a case.
Posted by The Curmudgeon at 8:40 AM

I think we have the same problem. I wish I had time to write more about what interests me, rather than writing what has long ago lost my interest. Unfortunately, the latter pays better than the former.

I talked and talked and talked to my husband after work today about a trial looming, and the briefs, and the cases, and this and that.. and he said, "you oughta write all that stuff down"... and I said, "it'd take all night, I can't do it right now." Just not enough time.. to do do all I wanna do. I know whatcha mean jelly bean.

I have the most ideas when I'm in the middle of writing something else, and it's hard to focus on the thing I should be writing....

...then, when I'm not writing something specific,

The ideas are nowhere to be found.

I think of a lot of good things to write when I'm awake in the middle of the night with the baby, but then the next day I'm too tired to remember them.

And, you know, things sound a lot better at 2AM in your head than they do in the light of day.

I was interested in that Billy Crystal story, and I'm not a Yankees fan either. Good for the Yankees for letting Billy play for a day, that's what I say.

I like the idea of writer's logjam. My mind has being very cluttered lately. I need a little peace in which to untangle the many story-threads.

I always knew lawyers were windy and now I find they are wordy, too! My dad was a lawyer, but he also taught high school economics, history, English and assorted other things. It was a big mistake to ask him a question at the dinner table. He would answer at length and there went the evening. I bet your long suffering spouse doesn't ask many questions!