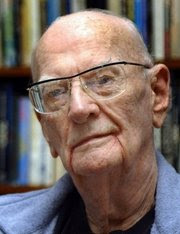 One of the grand masters of science fiction has passed from the scene. Arthur C. Clarke has died at the age of 90. The link takes you to Amal Jayasinghe's article on Yahoo! News for AFP about Clarke's life, death and career; it is from that site that this image has been copied.

Something I didn't know, or didn't remember, until reading the stories celebrating Clarke's life: The geostationary orbit, roughly 22,000 miles up, where satellites seem to move in sync with the rotation of the Earth, is often referred to as the Clarke Orbit or the Clarke Belt because of a paper Clarke wrote -- in 1945.

Clarke was a science fiction writer who studied science -- working first as an officer in the Royal Air Force in World War II on the development of radar and then, after the war, taking his degree in math and physics from King's College, London.

Clarke may be most associated in the public mind with the movie 2001: A Space Odyssey, but my real introduction to Clarke came in high school, when I read Childhood's End for an English class. I've read many of his books since. In recent years, most of his books have been in collaboration with other authors; see this Wikipedia entry for a list.

With Sir Arthur's passing we have lost a powerful advocate for humanity's expansion from our fragile planet into the wider worlds beyond.
Posted by The Curmudgeon at 8:38 AM