Don't count her out -- but can she get in? And who's waiting in the wings now?

People thought I was joking when I suggested recently that a deadlocked Denver convention might abandon both Senators Obama and Clinton and turn to a compromise candidate, Al "It's Not Easy Being Green" Gore. Of course, at that moment, just a couple of weeks ago, Obama was wearing the Mantle of Inevitability. 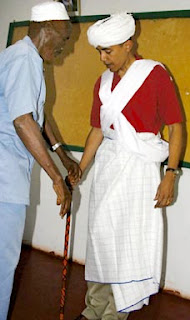 Since then, however, we have seen photographs of Obama wearing other things.

Now Hillary's wins in Ohio and Texas suggest that she really is going to be in this race all the way to the convention.

The pundits in the newspaper this morning were speculating that neither candidate can now win enough votes to secure a first ballot nomination. The level of intra-party vitriol, that rose significantly with Hillary's "red phone" commercial in Ohio, may continue to escalate through the primaries, up the slopes of the Rockies, and into the convention hall itself.

Poor Senator McCain. He finally clinches the Republican nomination last night -- only to be invited to the White House today for lunch. And, as a former Navy officer, he's too steeped in respect for the chain of command to refuse. When the President called, Senator McCain should have said, "Endorse me? Please, no. If you want to help me, endorse Hillary."

Anyway, a divided party meets in Denver -- embittered partisans of Obama and Clinton refusing to support the other candidate -- no smoke-filled rooms to fall back on (with the possible exception of Obama -- and he's trying to quit -- none of the Democrats smoke anymore) -- and as the nation looks on, some laughing, some crying, the party will have to reach out for someone else.... 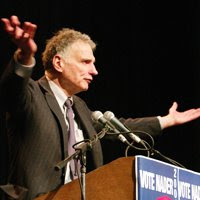 How about Ralph Nader?

Sure, he's in his 70's -- but so is McCain. The Republicans couldn't make age a factor.

And Nader's going to run anyway, siphoning off votes from whoever the Democrats nominate.

Unless, of course, they nominate him.
Posted by The Curmudgeon at 8:40 AM

and then there were three... oh, wait, that was the little pigs. never mind.

I like your thoughts on this, it would be a great day if they had to abandon both of them, they scare the hell out of me.

I knew I could count on you to talk about this. Now I can, too..

How does being married to a president make her more qualified?

Ok.. I grant that she may have more political experience than Mr. Obama. Experience isn't always a good thing though if nothing better can be done with it. Obama is my man.

McCain? Me and hubby fell asleep during his speech last night. And his wife scares me. She has alien eyes.

Where is Pat Paulson when we need him?

US politics is complex!

Do you think that publication of Obama in that outfit had anything to do with the latest Clinton victories?

How long has this year's election coverage been going on? I might drop dead from overkill... can we possibly stand more coverage until next November? But, please, please tell me that you are kidding about Al Gore... he makes me turn green! Perhaps, he will be unable to run, because John Coleman is going to sue him for "junk science global warming".

Ah, the DNC shot themselves in the foot when they decided that delegates would be awarded proportionally...they must've thought that HRC would have wrapped up the nomination by now. Perhaps a civil war at the convention in Denver.

Of course, it's a shame that the Dem convention isn't in Chicago this time. If a war over the superdelegates ensues, it would make the 1968 convention in Chitown seem tame by comparison...